Fidel Castro on Obama's Visit: Cuba Can Do Without US 'Gifts' 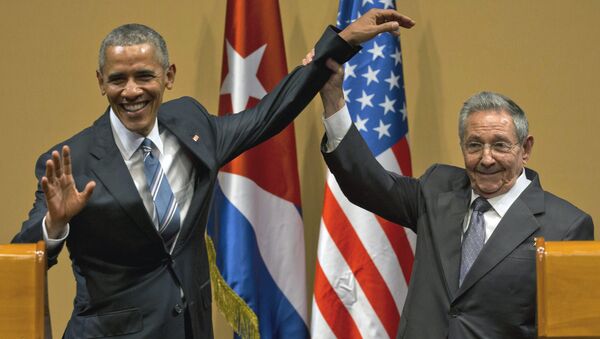 Cuba is a self-sufficient state that does not need gifts from Washington, former Cuban President and leader of the historic Cuban Revolution Fidel Castro said Monday.

Monroe Doctrine Ghosts: Why Washington's Soft Power Does Not Work in Cuba
MOSCOW (Sputnik) — Castro's remarks come after US President Barack Obama last week made a historic three-day visit to Cuba, the first by a US president since 1928.

"We are able to produce food and material wealth we need with the effort and intelligence of our people. We do not need the empire to gift us anything. Our efforts will be legal and peaceful, due to our commitment to peace and brotherhood with all human beings living on this planet," Castro said in an article published in the Granma daily newspaper.

Rock Legends Rolling Stones Give Historic Concert in Cuba (VIDEO)
Castro criticized Obama's calls "to forget the past and look to the future" in bilateral relations "after a merciless blockade that has lasted almost 60 years, those who have died in the mercenary attacks on ships and Cuban ports, an airliner full of passengers that detonated in midair, mercenary invasions, multiple acts of violence."

"Nobody should have an illusion that the people of this noble and selfless country would give up the glory, the rights and spiritual wealth they earned with the development of education, science and culture," he pointed out.

In December 2014, Obama announced that the United States would begin to normalize relations with Cuba after more than 50 years of non-engagement and hostilities. While the two countries reopened embassies in their respective capitals in July 2015, the congressionally-mandated US trade embargo continues to remain in effect.