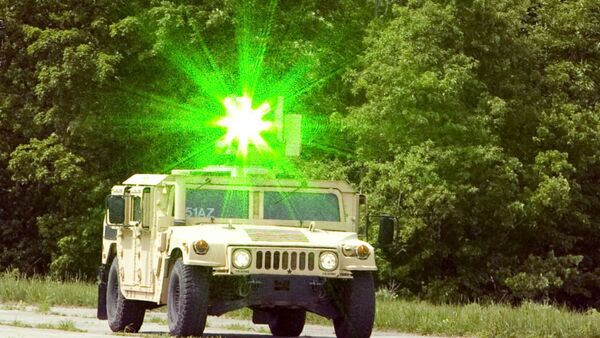 © Flickr / Program Executive Office Soldier
Subscribe
International
India
Africa
Just in time for the release of Star Wars: The Force Awakens on DVD next month, India’s Defense Research and Development Organization (DRDO) has announced that it is close to developing a 10-kilowatt directed energy weapon (DEW) capable of taking down errant drones.

A number of militaries around the world are in hot pursuit of futuristic energy weapons. Russia, the US, and China have all made major strides in high-energy laser and microwave technology, which could completely alter the battlefield.

India’s DRDO has announced that it, too, is perfecting a state-of-the-art energy weapon with "the establishment of critical technologies of precision tracking/pointing and laser beam combination."

The device has already been successfully tested at the Center for High Energy Systems and Sciences (CHESS) up to a range of over 2,600 feet. A demonstration for the military was also performed at the Terminal Ballistics Research Laboratory last September.

According to the Times of India, the DRDO is prioritizing DEW development, outlining a 15-year "technology perspective and capability roadmap."

The agency claims it has already built a number of smaller DEW systems. These include devices designed to disarm mines and other IEDs, vehicle-mounted crowd control units, and hand-held devices capable of overpowering armed individuals.

Long-term plans include "chemical oxygen iodine lasers," "high-power fiber lasers," and a 25-kilowatt laser that can knock out a ballistic missile during its "terminal phase" from up to four miles away.

Mounting energy weapons aboard aircraft and naval ships is also a priority, but could prove to be more challenging since directing a focused energy beam from a moving platform offers its own challenges.

Still, the difficulties are well worth the payoff. DEWs offer a number of advantages, including cost-effectiveness and an ammunition supply limited only by the weapon’s power source. Energy weapons also fire at the speed of light, are virtually silent, and can limit collateral damage.

Earlier this month, defense giant Lockheed Martin announced that it could produce an effective energy weapon.

"The technologies now exist. They can be packaged into a size, weight, power and thermal which can be fit onto relevant tactical platforms, whether it’s a ship, whether it’s a ground vehicle or whether it’s an airborne platform," Paul Shattuck, director for DEWs at Lockheed, told Defense News.

"Low-energy devices are already being completed for use in electro-optic countermeasures," reads the report analyzing the Russian navy.

We’re a long way from building a Death Star-style megaweapon, but maybe not so far from adding a real-life blaster to your Han Solo Halloween costume.