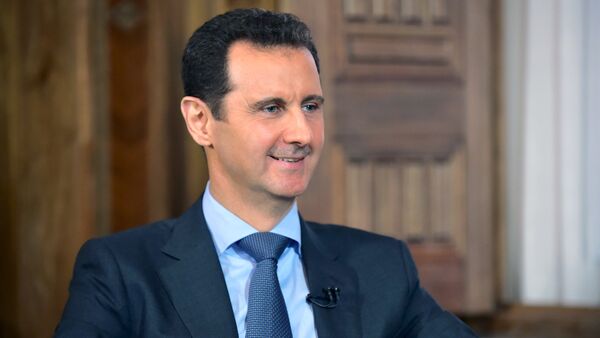 © REUTERS / SANA/Handout via Reuters
Subscribe
International
India
Africa
The opinions of French politicians and citizens clashed after the selfie of the ex-leader of Front National’s youth wing, Julien Rochedy, with Syrian President Bashar al-Assad became available online. What was the issue all about?

A group of French lawmakers visited Damascus on Sunday to meet with the Syrian President and see how things are unfolding in the war-torn country.

Rochedy, the former leader of Front National's (FN) youth wing, was among the French delegation and during a meeting with the Syrian president he snapped a cool selfie with al-Assad, which later went viral online.

​According to the French newspaper Le Figaro, Philippe Juvin, a French politician and Member of the European Parliament, condemned Rochedy's selfie with Assad, calling it a "scandal."

However, readers of the newspapers had a very different opinion about Rochedy's selfie:

France 'Changing Stance on Assad-Must-Go' After Paris Attacks
"Most French citizens want al-Assad to win in the fight against Islamic terrorists, funded by Saudi Arabia and Qatar," user Scipion002001 wrote in the comment section of Le Figaro.

"This picture will be the wallpaper for my computer screen!" the user named Heretic said.

In his own defense, Rochedy said that his choice to take a picture with al-Assad was his own personal decision which had nothing to do either with him being the former FN member or the part of the French delegation that visited Syria.