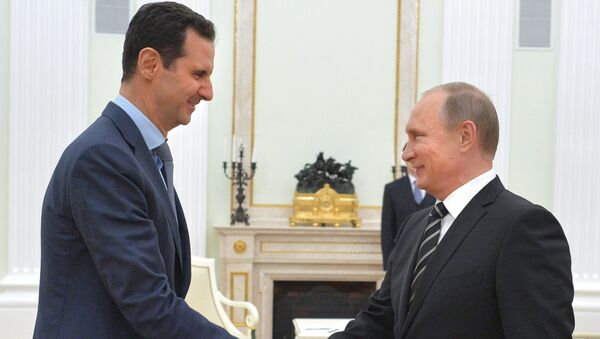 Syrian leader Bashar Assad told President Vladimir Putin that the liberation of Palmyra would have been impossible without the Russian Aerospace Forces' assistance. The Russian president told the UNESCO head that Russian forces deployed in Syria would participate in operations to demine the recently liberated city.

"In a conversation with the Syrian president, Vladimir Putin congratulated his counterpart on the liberation of Palmyra from terrorists by the Syrian military and noted the importance of preservation of this unique historic city for the world culture," Peskov said.

"Putin underlined again that despite the withdrawal of the main contingent of Russian forces from Syria, the Russian military would continue providing assistance to the Syrian authorities in fight against terrorism and liberation of [Syrian] territory from extremist groups," Peskov added.

According to the Kremlin spokesman, "Assad has highly appreciated the aid provided by the Russian Aerospace Forces and noted that the liberation of Palmyra, would have been impossible without Russia's support."

Earlier in the day, the Syrian Armed Forces in cooperation with patriotic militias and supported by the Russian Aerospace Forces completely liberated the historic city of Palmyra from terrorists.

"Putin informed [UNESCO head Irina] Bokova that representatives of the Russian contingent will participate in the demining of the ancient city by an order of the commander-in-chief," Peskov added.

Palmyra had been under the control of Daesh since May 2015. The jihadist group, which is outlawed in many countries, including Russia and the United States, destroyed part of the city, which has been designated a UNESCO World Heritage site.