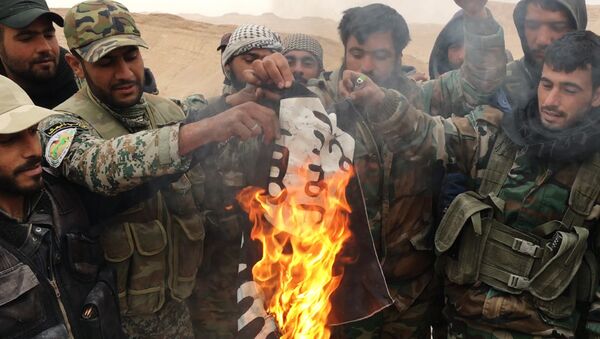 The recapture of Palmyra from Daesh by the Syrian Army and its allies demonstrated the success of Damascus' strategy in fighting terrorism, President Bashar Assad said Sunday according to SANA news agency.

Earlier in the day, the Syrian Arab Army and popular defense forces drove Daesh terrorists out of the ancient city of Palmyra.

"Having Palmyra in the army's hands is an important achievement and new evidence of the effectiveness of the strategy followed by the Syrian army and its allies in the war against terrorism," President Assad told a delegation of French parliamentarians.

The Syrian Army said the operation to liberate Palmyra was supported by the Russian Aerospace Forces. Sappers began defusing explosives left by terrorists in the town.

Assad added that Damascus' strategy is more efficient than that of the US-led coalition of more than 60 countries.

The town and its historic ruins had been under Daesh control since May 2015. The jihadist group, which is outlawed in many countries, including Russia and the United States, destroyed part of the historic sites, which are a designated UNESCO World Heritage site.