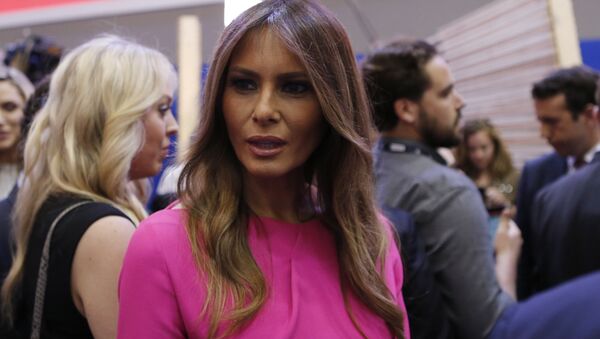 There is a chance Donald Trump might become the next US president in 2016. If that happens, the United States would also have a new first lady – Melania Trump. It seems most people don’t know much about her except that she is a former model born somewhere in Eastern Europe. Sputnik fills in the blanks.

If Trumps gets elected Melania might become one of the most beautiful first ladies in the history of the United States. But what else do we know about Mrs. Trump?

@RedHourBen You have to admit, Melanie Trump has a solid Blue Steel pic.twitter.com/54NQGCsdow

​1. Melanie was born in former Yugoslavia as Melanja Knavs in a family with modest means. If Trump becomes president, Melanie would become only the second foreign-born first lady after John Quincy Adams' wife Louisa, who was born in England.

2. Contrary to the stereotype that models are dumb, Melania is educated, having finished the University of Ljubljana in Slovenia. She also speaks four languages: English, Slovene, French and German.

3. Knavs began modeling at the age of 16 and within two years she was signed to a big modeling agency in Italy. After working in Milan and Paris, she moved to New York in 1996 subsequently appearing on the covers of Vogue, Vanity Fair,  GQ, Glamour, New York Magazine, Elle, FHM and other big magazines in the fashion industry.

​4. Although Knavs met Donald in 1998 at a fashion week party, the two didn't get married until January 2005. Despite a big age difference, Donald and Melania seem to be a perfect couple. According to Trump the two never even had an argument. That's surprising considering Trump's quarrelsome nature in politics.

5. Although some think she's another hot gold-digger out to grab the older and rich Trump, Melania is more than just a pretty face. Melania has been involved with several social causes, including the Police Athletic League, the Boys Club of New York and the American Red Cross.

​6. Like her husband, Melania is a successful entrepreneur. She's launched a jewelry collection in 2013, Melania Timepieces & Jewelry, and her own skincare line, Melania caviar Complex.