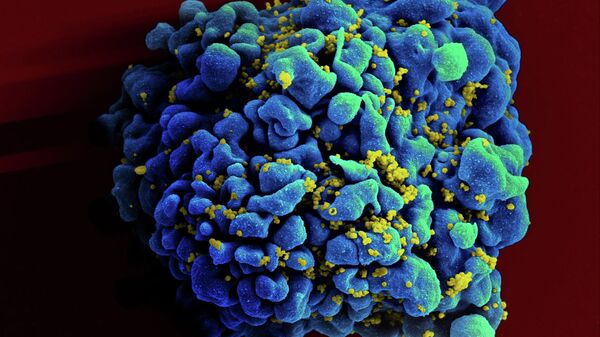 A group of scientists from Scripps Research Institute (TSRI ) discovered that immune cells able to conquer HIV are present in the human body.

Estonia Hopes to Develop Zika Vaccine in 2-3 Months
Some people infected with HIV can produce antibodies that effectively neutralize many strains of the dangerous, rapidly mutating virus. A healthy person, however, would need to be immunized with special antigens in order to produce the required antibodies.

The uccess of a potential vaccine depends on the ability of the immunogen to bind with cells called B-lymphocytes and to activate them so that they produce antibodies. A team of scientists wrote in a new study published in Science magazine on March 24 that most people have so-called "embryo" precursor cells in their bodies which can generate VRC01 antibodies needed to conquer HIV cells.

The scientists tried to develop a special kind of immunogen which would bind certain B-lymphocytes, potentially responsible for immunity against HIV. The immunogen has to be very unique because the required progenitor cells are very rare among other B-lymphocytes.

Russia Prepares Documents to Conduct Ebola Vaccine Tests in Guinea
The immunologists synthesized protein immunogen EOD-GT8 60mer. The research showed that mice vaccinated with the protein generate VRC01 antibodies. If EOD-GT8 60mer can trigger the same reaction in humans, the scientists may then develop several more immunogens that will jointly cause the synthesis of a wide range of antibodies able to conquer HIV.

In a recent article published in Scientific Reports magazine, genetic scientists wrote that CRISPR/Cas9  technology is able to remove HIV virogenes from infected T-lymphocytes which the virus usually attacks. The finding may help to develop new methods of therapy for people with AIDS.