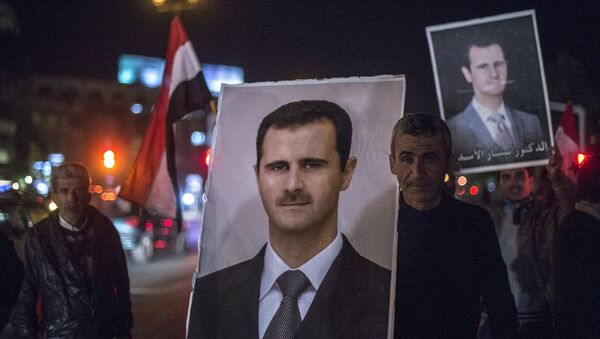 It is up to the Syrian people to decide the fate of their President Bashar Assad, French lawmaker Thierry Mariani told RIA Novosti news agency.

France, Germany, UK, EU Call for Prompt Syria Peace Talks Resumption
On Friday, Mariani led a group of five opposition center-right Republican Party MPs on a visit to Syria where they plan to meet with local political and religious leaders.

“The situation in Syria is developing well and even though I am an opposition politician I welcome the recent change in our government’s position, which made no difference between Daesh and Assad. Now they draw a clear line between the two: first we get rid of Daesh and then we’ll see what to do with the Syrian government. I think it is the right way to go, but I still believe that we should ask Syrians what they themselves think about this,” Mariani said ahead of the visit.

Commenting on the Syrian army’s advance Thierry Mariani said that the liberation of Palmyra would be very good news.

“I believe that everyone who is really against terrorism should rejoice at the Syrian army’s successes. This does not mean we endorse the Syrian regime, it only means that we know who the enemy is threatening France, the West, Russia, Belgium – everyone. This enemy is Daesh and it is our paramount task to fight it,” Mariani said.

He also wished that the French authorities had changed their stance right after the November terrorist attacks in Paris.

Noting that Syria was the place many French jihadists are being trained to kill, Thierry Mariani emphasized the need for data-exchange cooperation with the Syrian government – something still refuses to do.

“This is a paradoxical situation we have here: most of the people we are looking for have gone to Syria and we have no coordination with Syrian security services. By breaking off our ties with Damascus we have deprived ourselves of vital information that would help us prevent terrorist attacks,” Thierry Mariani said in conclusion.

On November 13, extremists wearing explosive belts and carrying automatic weapons attacked several sites across Paris, killing 132 and injuring dozens of people at restaurants, the Bataclan concert hall and in the vicinity of the Stade de France sports arena. Daesh claimed responsibility for the attacks.