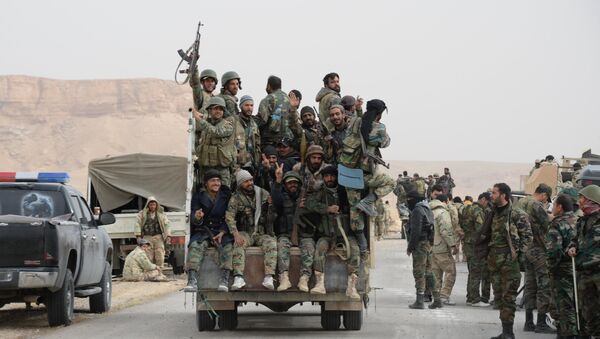 A field commander of Syria’s Desert Falcons militia forces thanked Russian President Vladimir Putin on behalf of the Syrian people for supporting the country in the fight against terrorism.

Assad: Palmyra Liberation Proves Success of Syrian Army's Strategy (VIDEO)
Earlier on Sunday, the Syrian Army alongside the Desert Falcons forces fully liberated the ancient city of Palmyra from Daesh militants. A field commander of the unit in an interview with RT thanked Russia for another major victory over terrorists.

He also spoke about the operation which ended with the liberation of the ancient city.

"There were several stages in the operation. Our forces surrounded the city and regained control over it. The problem was that terrorists laid a lot of mines on the roads," the commander said.

According to him, some roads have been cleared of mines, but the work is still underway.

"We thank President Putin for this victory. He has supported our country and our army while other countries are supporting terrorists. On behalf of our government and our people, we thank Russia very much," he added.

Now, the Syrian Army and its allies are expected to advance on Raqqa, the de-facto capital of the Daesh "caliphate."

"Russia’s engagement was very important and played one of the key roles in liberating Palmyra. The Russian aviation, particularly attack helicopters, destroyed terrorists’ ambushes at the heights around Palmyra. Using Russian intelligence data, we located terrorists and could track them," the general said.

He underscored that the liberation of Palmyra is a serious blow to terrorists’ logistic and supplying capabilities. According to Suleiman, Palmyra was a supplies hub for the terrorists.