Assad to French Lawmakers: Syria is ‘Too Small’ for Federalization 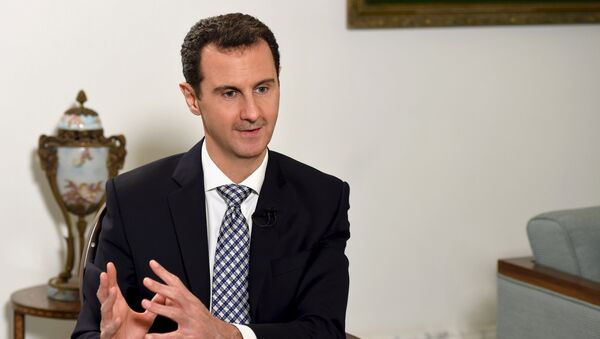 President Bashar Assad told French lawmakers visiting Damascus on Sunday that Syria is too small for federalization, a member of the delegation told Sputnik after talks with the Syrian leader.
MOSCOW (Sputnik), Svetlana Alexandrova — Earlier in the day, a group of French lawmakers met with Assad in Damascus during their visit to the Middle East country.

"[Assad] emphasized that Syria is a small country and too small for implementing an idea of federalization, also due to the fact, that all communities are linked and closely woven together," Nicolas Dhuicq said.

He added that Assad believed Syrian Kurds' bid for federalization was a bad idea.

"He mentioned Kurds and the fact that they talk about federalization. To his mind, it will not be a good idea, especially, concerning the Arab population in the area. He said that in Syrian regions with Kurds population, Kurds, actually, represent only 30 percent of the population, so they will be a minority on their own territory," Dhuicq said.

Assad believes that central state should play a permanent role in Syria while some areas can be granted more autonomy, Nicolas Dhuicq told Sputnik.

"He said that he is thinking about a new state’s organization or structure. Assad has mentioned ideas of decentralization, something that we have here in France. According to his vision, some areas in Syria may be granted more freedom and power but the permanent role of the central state and authority will remain."

Bashar Assad disagrees that Muslims should have an exclusive right to hold a presidential post in Syria, Nicolas Dhuicq, the member of the French lawmakers' delegation visiting Damascus said.

"He has mentioned a new constitution and the fact that he disagrees with proposals to introduce in a new constitution a legislative that set forth a right of only a Muslim to become a president. 'It is unacceptable', he said adding that all citizens in Syria must have same rights," Dhuicq said.

France 'Changing Stance on Assad-Must-Go' After Paris Attacks
"[Assad] hopes that there would be an agreement in summer between the parties to the conflict before the presidential election in the United States," Nicolas Dhuicq said.

The latest round of talks between the Syrian government and opposition forces wrapped up in Geneva on Thursday and is expected to resume on April 10.