Savchenko to Serve Sentence in Russia Unless Putin Decides Otherwise 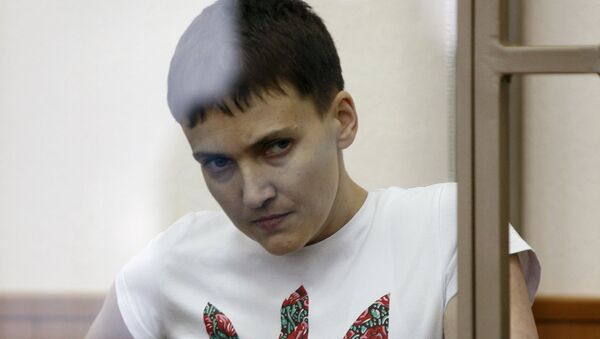 © REUTERS / Stringer
Subscribe
Ukrainian national Nadezhda Savchenko, sentenced to 22 years in prison by a Russian court for her involvement in the killing of two Russian reporters in Donbass, has been convicted and will serve her sentence, any other decisions on the issue can only be made by the Russian president, Kremlin spokesman Dmitry Peskov said.

Kremlin: Exchange of Savchenko for Detained Russian Nationals Possible
MOSCOW (Sputnik) — On Friday, Sergei Ivanov, the chief of staff of the Russian presidential administration, said that Savchenko could be exchanged for two Russian citizens prosecuted by Kiev if it complied with national laws and upon a corresponding decision of Russian President Vladimir Putin.

He added that such an exchange should not be linked to the implementation of the Minsk agreements on the Ukrainian reconciliation.

"As far as Savchenko is concerned, the situation for us is as simple as it can be – Savchenko has been convicted, and everything else happens accordingly to the Russian legislation. She will serve her sentence. Other decisions can only be made by the head of state. There has been no such decision yet," Peskov said on the TV Tsentr television channel in a program which will be aired Saturday.

Kiev and Wests’s statements on the case of Nadezhda Savchenko are examples of "total Russophobic hysteria," he said.

"I would add this to effects of the total Russophobic hysteria, which is taking place. But, probably, this is a manifestation which does not promote, but on the other hand, makes solution of this issue much more difficult."

On Tuesday, Savchenko received a 22-year prison sentence after being convicted in a Russian court of directing artillery that killed Russian journalists Igor Kornelyuk and Anton Voloshin in eastern Ukraine on June 17, 2014.

On Tuesday, Ukrainian President Petro Poroshenko said Kiev was ready to swap Savchenko for two Russian nationals captured in eastern Ukraine last year while allegedly fighting on the side of the Donbass militia.

Kiev authorities claim that Alexander Aleksandrov and Yevgeni Yerofeev were serving in the Russian military at the time of their capture in the Lugansk region, while the Russian military says both men were not on active duty and traveled to Ukraine on their own volition.

000000
Popular comments
Federica Mogherini called for the defendant's release even before the verdict was delivered- as if the Russian legal system has no meaning. That is the extent of EU hubris. The case is no doubt set to become a human rights issue- ignoring the fact that the lady (only ever portrayed implausibly as a thin girl band type teen trapped in a cage) in her former life was a helicopter gunner with the Aidar Battalion whose activities left two innocent Russian journalists dead. Federica might want to think about the motivations of a woman willing to join a group like Aaidar which is well known for its fascist sympathies and which has been accused of IS type butchery and starving civilians. Or does that not matter to the EU elite?