Full of Grace and Love: St. Matrona of Moscow 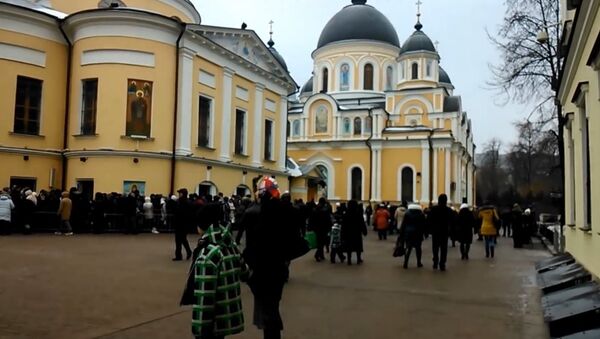 Every city has places its citizens are rightfully proud of and also “strange places,” which still mean more to the citizens than piles of glitzy guidebooks.

Pope Francis Canonizes Sri Lanka’s First Saint, Urges Unity
Walking down Taganskaya street in downtown Moscow one can hardly miss the long lines of people queuing up to bow to the remains of Matrona Nikonova, the Blessed Eldress of Moscow, also referred to as Matrona of Moscow, which are now in the Church of the Protecting Veil of Our Lady at Intercession Convent.

Matrona was born in 1881 into a poor family in the village of Sebino in the Tula region of Russia. Blind from birth, she bore her infirmity with humility and patience, and God made her a vessel of grace.

When she turned seventeen, Matrona became paralyzed and was unable to walk from then on. It was then that she gained the ability to heal the sick, foretell the future and comfort the infirm.

In 1925 she left her village to settle in Moscow and, after her mother’s death in 1945, she moved frequently, welcomed secretly into the houses of the faithful.

Not only the Muscovites but also people from afar, of all ages and conditions, thronged around her to ask her advice and her prayers. In this way she truly became the support of afflicted people, especially during World War II.

When the sick and possessed were brought to her, she placed her hands on their heads, saying several prayers or driving the demons out, always insisting that she was doing nothing of herself but that God was healing by her mediation.

Matrona passed away on April 19, 1952 and was buried at the Danilov monastery.

Miracles have multiplied at her tomb and, ever since her remains were moved to the Church of the Protecting Veil of the Mother of God  in March 1998, the faithful who, in their thousands, line up to venerate Moscow’s new protectress, have turned to her icon and brought her their various problems as though Matrona were still alive in front of them.

The Blessed Elder of Moscow was canonized in 1999.