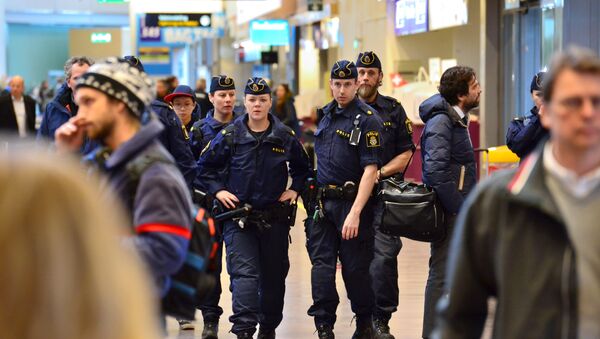 © REUTERS / Johan Nilsson/TT News Agency
Subscribe
Daesh-terrorist Mohamed Belkaid, who for years lived in the suburban town of Märsta in Metropolitan Stockholm, was pointed out by CNN as a "commander" of the terrorist cell that carried out the terrorist attacks in both Brussels and Paris.

Mohamed Belkaid, 35, was killed in a skirmish, which ensued when the Belgian police raided suspected terrorists' apartment in Brussels on March 15. Belkaid was gunned down by the police, and next to his dead body a Daesh flag was found. Less than a week later, terrorist attacks against the Brussels airport and subway occurred.

CNN reported with reference to Belgian intelligence sources that Belkaid in fact was the commander of the Daesh cell that was behind both attacks in Brussels and the terrorist attacks in Paris last November, which claimed 34 and 130 lives respectively.

According to the Dagens Nyheter newspaper, the Algerian-born 35-year-old Belkaid, whose flat in Brussels was raided by police just days before the deadly attacks hit the Belgian capital, had been registered in Sweden since 2010, and was married to a Swedish national, who later passed away.

Two months prior to the Paris attacks, Mohamed Belkaid was registered as passing through a checkpoint together with fellow Muslim extremists Salah Abdeslam and Najim Laachraoui, both involved in the Brussels blasts.

Mohamed Belkaid arrived in Sweden in 2010. A year later, he was granted a residence permit. He settled in a municipality north of Stockholm, where he was still registered when he was shot to death in an anti-terror raid in Brussels. Belkaid was active as an assistant worker for two companies linked to the construction industry. Notably, Belkaid had a police record back in Sweden for committing a number of minor offences, including theft and illegal knife possession. His misdemeanors, nevertheless, never qualified as adequate grounds for deportation back to Algeria.

Anxious Swedish Police Investigate Dead Terrorist Who Lived Near Stockholm
In April 2014, Belkaid Mohamed went off to Syria to join Daesh, according to the terrorist registry which had been leaked to the British television channel Sky News and contains detailed information on tens of thousands of Daesh recruits. The documents show that the 35-year-old had, according to a form he filled out, specifically selected to become a suicide bomber.

In Belgium, Belkaid, who was known under the assumed name of Samir Bouzid in Belgian jihadi circles, was wanted by the police as early as December 2015. In Sweden, neither of the competent authorities has provided adequate commentary for the failure to keep a closer eye on the petty thief-turned-terrorist.

Sweden's Security Police SÄPO replied in an e-mail to Svenska Dagbladet that it is not common practice to communicate data on individuals, but ensured that they remain in contact with the Belgian police.

Swedish Police Not Sure They Can Handle Terrorist Threat
Sweden's Interior Minister Anders Ygeman refrained from comment as well, pointing out that Säpo "probably had good reasons not to comment either.

Fredrik Wallen, spokesman of the Swedish police force, abstained from commentary altogether, but referred to SÄPO, which is supposed to handle the matter.

Belgium is currently Europe's leading provider of Daesh jihadists per capita, one of them being terrorist Najim Laachraoui, who fought for Daesh in 2013 and 2014. Sweden currently ranks second, with at least three hundred Swedish citizens having joined the terrorist sect. According to the same SÄPO, approximately 140 have returned and remain the greatest terrorist threat to Sweden.