Russia Could Change Legislation Amid Migrant Crisis in Europe 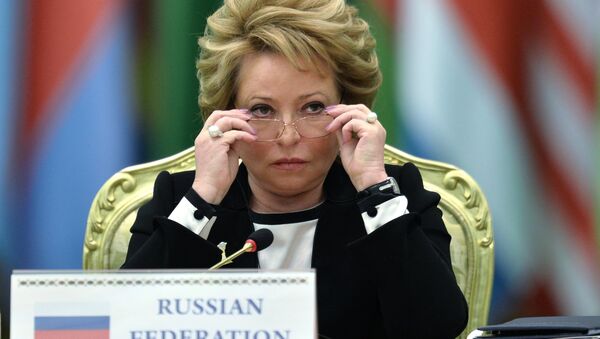 The Russian Federation Council might propt changes in the country's legislation to keep the possible consequences of the European migrant cirisis under control.

MOSCOW (Sputnik) — The speaker of Russia's Federation Council, the upper house of parliament, said Friday that she could not rule out changes being made to the Russian legislation amid the migrant crisis in Europe.

"The Federation Council is closely following the situation and the possible consequences for Russia from the growing migration flow to Europe. I believe that our domestic migration laws are effective enough to keep the situation under control. However, the situation in this area is changing rapidly, and it cannot be ruled out that changes to our legislation might be required," Valentina Matvienko told RIA Novosti.

European Commission Rules Out Any Possible Deal With Russia on Migration
Europe has been experiencing a massive refugee crisis, with hundreds of thousands of undocumented migrants fleeing their home countries in the Middle East and North Africa to escape violence and poverty.

The large-scale migration has created numerous legal, financial, social and political issues in the European countries, not only for the authorities, but also for ordinary citizens, Matvienko stressed.

Public opinion on the issue of refugees is split, there is no unity among state leaders either, the situation in the areas that host the migrants is disturbing and the EU residents complain that the programs of assistance to the migrants are turning into a "tangible burden" for their countries’ budgets, she stated.

"I am talking about this without any malicious joy. After all, it is a true human drama, sufferings, hardships of over one million of people," Matvienko said.

According to the International Organization for Migration (IOM), the number of migrant arrivals to the European Union surpassed 160,000 in 2016, in addition to more than one million of arrivals in 2015.