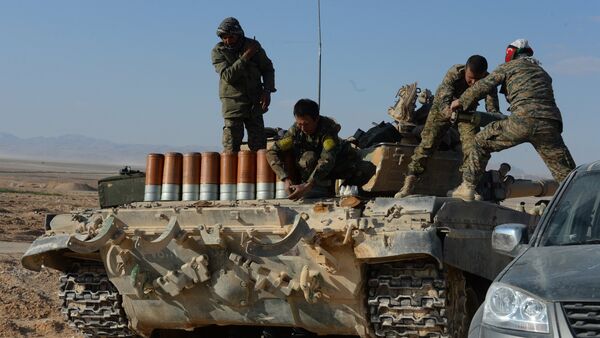 The Syrian army and the Desert Falcons militia commenced an assault on the ancient citadel of Palmyra on Friday morning, a RIA Novosti correspondent reported.

Landmark Victory: How Syrian Desert Falcons Wiped Out Daesh From Palmyra
PALMYRA (Sputnik) — The militias consolidated their grip on a height some 650 yards near the citadel. Vanguards have been approaching the site from several fronts, with mortar detachments providing them with cover. Air support and heavy artillery are not being used in the operation.

Daesh terrorists group have been sporadically shelling the heights from their stronghold.

On Thursday, army and militia consolidated their positions on the territory of the hotel complex in southeastern Palmyra after a joint operation to gain control of strategic heights surrounding the historic city.

Russian Jets Strike 146 Terrorist Targets Around Palmyra
The troops entered the city at the junction of the Damascus — Palmyra — Deir ez-Zor highway, which is under government control. After fierce fighting near the Semiramis hotel, the militia managed to break down the IS defense and push the extremists deeper into Palmyra.

Palmyra has been under Daesh control since May 2015. The terrorist grou has since destroyed part of the city, which is a designated UNESCO World Heritage site.

A brigadier-general told Sputnik on Wednesday that the Syrian army had recaptured a historic part of the city from the militants.