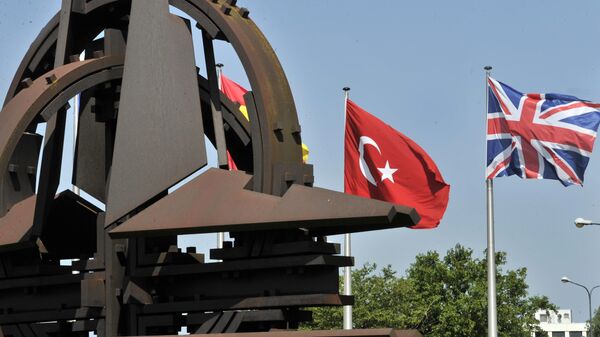 Ekaterina Blinova
All materialsWrite to the author
Politically and symbolically any attack on Belgium – the state where the political and administrative center of NATO is located – is by implication an attack on the US and its global dominance, French journalist and founder of Agora Erasmus political organization Karel Vereycken told Sputnik.

Europe as 'Battlefield': Who Contributed to Emergence of Radical Islamism
The Brussels terror attacks on March 22, 2016 have triggered a heated debate among political analysts and military experts.

While some thought leaders are calling for strengthening a military alliance between the EU and the US, others have called attention to the fact that NATO has proven inefficient in mitigating and preventing terror threats. On the contrary, they argue, the Alliance has long been fanning the flames of the Islamist insurgency in Central Asia, the Middle East and North Africa.

The irony of the situation is that the NATO Headquarter is just 8 kilometers from the attack sites in Brussels, French journalist and founder of Agora Erasmus, the Belgian LaRouche movement, Karel Vereycken notes.

"Being under attack, Belgium might want to close ranks with its military 'protector,' namely the US and NATO. After all, NATO headquarter is located between the Brussels Zaventem airport and the Maalbeek metro station," Vereycken told Sputnik.

Brussels Terror Cell Was Plotting to Blow Up a Nuclear Plant
The journalist recalled that on September 12, 2001, the day after 9/11 Victoria Nuland, then US Ambassador to NATO "wanted to invoke Article 5 of the Charter of the Atlantic, obliging all NATO member states to follow the US into any given war destination."

He called attention to the fact that just two days before 9/11, on September 9, 2001, "two kamikazes blew up commander [Ahmad Shah] Massoud in Afghanistan." Believe it or not, they came from Molenbeek with Belgian passports…

"The plot was carried out by members of a European-based cell of al-Qaeda that on remote-control command from Osama bin Laden reached back to Afghanistan to destroy its prey," The New York Times wrote in December 2001.

It is obvious that the roots of the latest tragedy are running deep in Belgium's history.

The two September 2001 terror assaults prompted Washington and NATO to launch one of the US longest military operations in Afghanistan. 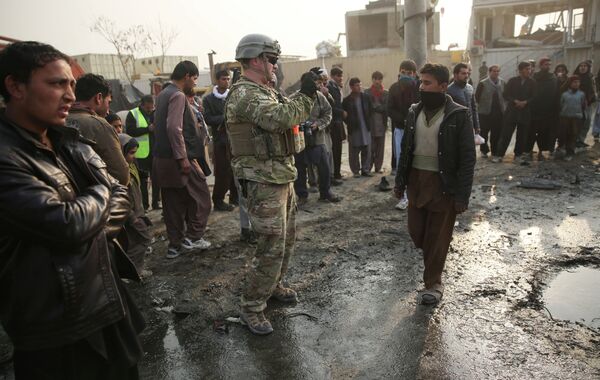 A US soldier at the site of a suicide car bomb attack in Kabul, Afghanistan.
© AP Photo / Massoud Hossaini

However, the Alliance's 15-year "war on terror" has achieved no tangible results. Instead, the power vacuum in Central Asia, the Middle East and North Africa was filled with new Islamist monsters, which are now threatening to drag Europe into a social crisis.

Embarrassingly for NATO, the deadly Brussels attacks occurred right under its very nose.

"Politically and symbolically, any attack on Belgium, is by implication an attack on the US and its world dominance," Vereycken stressed.

Daesh's Rampage is More 'an American Failure Than a European One'
According to the French journalist, NATO's policies remain largely inconsistent.

"[US Secretary of Defense] Ash Carter came to Brussels recently and 'ordered' Belgium to participate in the US coalition in Syria. The US Ambassador to Brussels also called on Belgium to increase spending on defense while austerity has reduced spending on health and education. While [US Secretary of State] Kerry seems to be on a different line, some people in the Pentagon and the White House desperately need enemies to justify spending ten times more than the total amount of dollars spent by the ten nations following the US in defense spending," he told Sputnik.

At the same time, Washington and its allies are turning a blind eye to NATO member-state Turkey's illicit oil trade with Daesh (ISIL/ISIS) as well as to evil role of Saudi Arabia and Qatar in sponsoring Islamic extremists worldwide.

To complicate matters further, NATO has rejected Russia's helping hand in the war against Daesh and international terrorism.

"Every EU citizen, every citizen of NATO member countries… must realize that this organization refuses to maintain a fully-fledged dialogue [with Russia] on counter-terrorism."

Zakharova stressed that what happened in Brussels represents a challenge to the whole world.

Expressing his deep condolences for the relatives of those killed in the deadly Brussels attacks, Alexei Pushkov, the head of the Foreign Affairs Committee in Russia's parliament, noted in one of his tweets that "it's high time for the West to reject anti-Russian hysteria and to turn to cooperation with Russia against terrorism. Paris and Brussels have shown exactly who threatens Europe."

​"Instead of looking endlessly for confrontation and geopolitical domination, Belgium, as well as other member states of NATO and the EU have everything to win from detente, entente and cooperation with Putin's Russia, who happens to be the only head of State sticking to principles, and really committed to ending Daesh," Agora Erasmus' official statement reads.