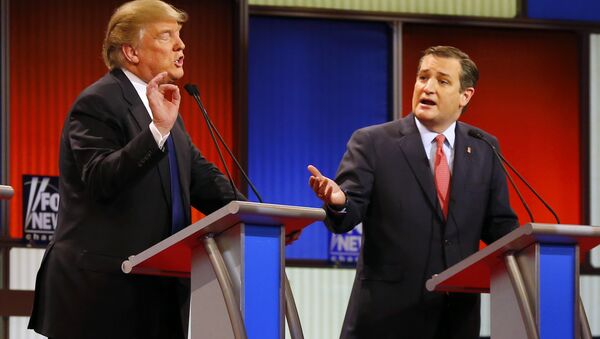 Republican presidential candidate Ted Cruz holds a modest 4.8 percentage point lead over frontrunner Donald Trump ahead of Tuesday’s primary election in the US state of Wisconsin, according to a poll commissioned by the Washington Free Beacon and released on Friday.

"Wisconsin is expected to be a crucial contest in the race for the Republican nomination, as Trump looks to expand his lead, Cruz clings to diminishing prospects to unseat him as the frontrunner, and [Ohio Governor John] Kasich seeks to consolidate enough support to keep his bid relevant," the Free Beacon said on its website.

Kerry Sees Clinton, Trump as 'Frontrunners' in US Presidential Race
A recent estimate by Voice of America gave Trump a 739-465 edge thus far in the number of delegates to the Republican National Convention, where 1,237 delegates are needed to secure the nomination for party’s nominee for president of the United States.

Wisconsin will send 42 delegates to the convention, all of whom will go to the top vote getter in the state’s winner-take-all delegates primary.