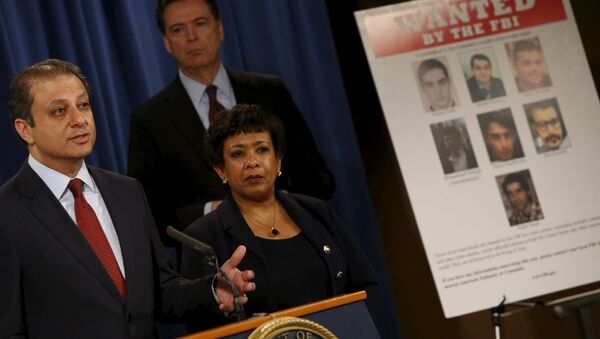 © REUTERS / Jonathan Ernst
Subscribe
One of the seven Iranian defendants the United States has charged in a massive cyber intrusion to the US financial sector has also been charged with trying to hack into a dam in New York State, US Attorney General Loretta Lynch said during a news conference on Thursday.

WASHINGTON (Sputnik) — The Attorney General also noted that any access to the dam would have given the hacker the ability to control its water levels and flow rates, which in turn could have "have posed a clear danger to the public health and safety of Americans."

"In addition to the actions that we have detailed, one of the defendants is also charged with illegally obtaining access to the supervisory control and data acquisition system of the Bowman Dam in Rye, New York," Lynch stated.

She added that a grand jury in New York State has found the alleged hackers "conspired to conduct a series" of attacks against civilians in the US financial sector, which cost the victims "tens of millions of dollars."

Hamid Firoozi was also charged with obtaining unauthorized access into the supervisory control and data acquisition systems to the Bowman Dam in Rye, New York in 2013 Lynch added. The move could have given the hacker the ability to control the dam’s water levels and flow rates.

"In unsealing this indictment, the Department of Justice is sending a powerful message: that we will not allow any individual, group or nation to sabotage American financial institutions or undermine the integrity of fair competition in the operation of the free market," Lynch warned.

All seven defendants now face a maximum sentence of ten years in prison for attempting to commit, aid and abet computer hacking, while Firoozi faces an additional five years for obtaining unauthorized access to a protected computer at the Bowman Dam.