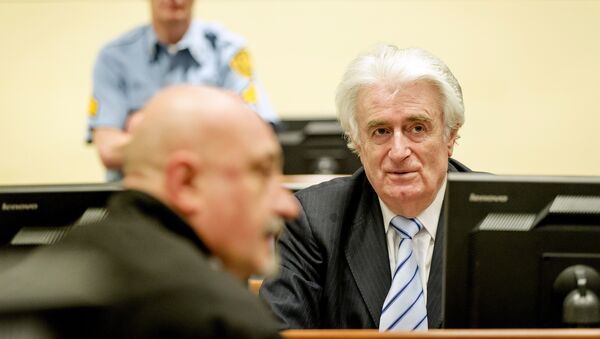 The International Criminal Tribunal for the former Yugoslavia (ICTY) in the Hague found on Thursday former President of the Republika Srpska Radovan Karadzic guilty of Srebrenica genocide in 1995 and sentenced him to 40 years in prison.

#Karadzic is sentenced to 40 years of imprisonment.

​The International Criminal Tribunal for the former Yugoslavia (ICTY) in the Hague sentenced Thursday former President of the Republika Srpska Radovan Karadzic to 40 years of imprisonment over his role in crimes committed in Bosnia and Herzegovina in the 1990s.

​Karadzic faced charges on 11 counts of crimes against humanity, breaching the laws or customs of war and genocide for his role in the 1992-1995 Bosnian War. He was found guilty of 10 of those.

Srebrenica: #Karadzic found guilty of genocide in Srebrenica in 1995.

​The International Criminal Tribunal for the former Yugoslavia (ICTY) in the Hague found on Thursday former President of the Republika Srpska Radovan Karadzic guilty of ordering the takeover of the Srebrenica region before the 1995 massacre.

The Srebrenica massacre occurred in 1995, in and around the Bosnian town of Srebrenica. The killings were perpetrated by forces loyal to Republika Srpska, an ethnically Serbian breakaway region of Bosnia and Herzegovina.

"The accused…ordered the takeover of Srebrenica," the tribunal’s judge said.

Int'l Yugoslavia Tribunal Acquits Karadzic on One of Two Genocide Charges
Karadzic, 70, became the most high-profile defendant after the death of former Yugoslav President Slobodan Milosevic in 2006 before his trial concluded.

The Bosnian War erupted between Bosnian Muslims, Serbs and Croats when Bosnia and Herzegovina announced its secession from Yugoslavia in 1992.

Various estimates put the death toll in the conflict at around 100,000 people.

Karadzic is accused of the massacre of an estimated 8,000 Muslim men and boys after Serbian forces overran the Bosnian town of Srebrenica in the waning days of the war in July 1995.