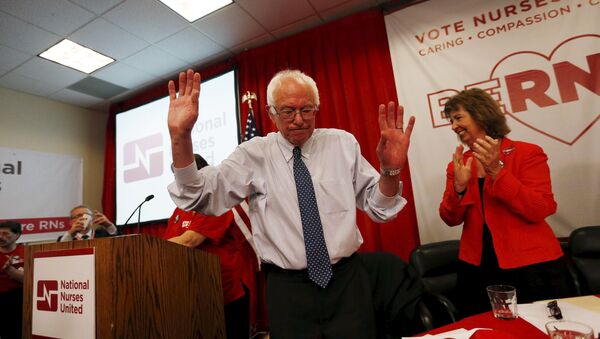 © REUTERS / Stephen Lam
Subscribe
Speaking in “The Young Turks” online show, Bernie Sanders refused to say whether he would back Democratic candidate Hillary Clinton if he loses the primary.

Cenk Uygur discussed the ‘millennial movement' with presidential candidate Sanders, asking if he would persuade his supporters to vote for Clinton if he does not win.

As Uygur put it, a "lot of people in [millennial] movement have decided that [Sanders] is their leader." He suggested that millennials "have [Sanders] as more popular as a person they'd like to meet, above Beyonce."

"If you were to lose," Uygur said, "and the Democratic Party comes to you and says take this movement that is full of energy and that is against the establishment, and make sure they vote for the establishment candidate, what do you say?"

Sanders avoided a direct answer, neither confirming nor denying whether he would offer support for "establishment candidate" Clinton.

"What we do is together, as a nation… as a growing movement is we say: ‘If we don't win,' — and by the way we are in this thing to win, please understand that, — ‘What has the Democratic establishment gonna do for us?'" Sander said.

Developing on the topic, he said "If I can't make it, — and we're going to try as hard as we can ‘til the last vote is cast, — we want to completely revitalize the Democratic party and make it the party of the people rather than one of large campaign contributors."

Sanders sees himself as a working-class-oriented opposition candidate subverting the campaign contributor interests of the Democratic Party. He would likely conduct his own policy and retain his own supporters even if he lost.

Millennials are the demographic following Generation X. There are no precise dates for when the generation starts and ends; most researchers and commentators use birth years ranging from the early 1980s to around 2000, a group that includes the wide-ranging interests of both Justin Bieber and Malala Yousafzai.

000000
Popular comments
Remaking the Democrat Party would take a coup followed by a purge of all the DNC Corporatists and neoliberalcons--a very tall task. It would be much easier to form an alternative political party based on the already created anti-establishment Movement and force the remnants of the Democrats to merge with their Republican kin.
karlof1
25 March 2016, 02:55 GMT
000000
What kind of a socialist would he be to back Hitler?
surferket
25 March 2016, 03:26 GMT
000000
Newsfeed
0
New firstOld first
loader
LIVE
Заголовок открываемого материала
Access to the chat has been blocked for violating the rules . You will be able to participate again through:∞. If you do not agree with the blocking, please use the feedback form
The discussion is closed. You can participate in the discussion within 24 hours after the publication of the article.
To participate in the discussion
log in or register
loader
Chats
Заголовок открываемого материала
Worldwide
InternationalEnglishEnglishMundoEspañolSpanish
Europe
DeutschlandDeutschGermanFranceFrançaisFrenchΕλλάδαΕλληνικάGreekItaliaItalianoItalianČeská republikaČeštinaCzechPolskaPolskiPolishСрбиjаСрпскиSerbianLatvijaLatviešuLatvianLietuvaLietuviųLithuanianMoldovaMoldoveneascăMoldavianБеларусьБеларускiBelarusian
Transcaucasia
ԱրմենիաՀայերենArmenianАҧсныАҧсышәалаAbkhazХуссар ИрыстонИронауОssetianსაქართველოქართულიGeorgianAzərbaycanАzərbaycancaAzerbaijani
Middle East
Sputnik عربيArabicArabicTürkiyeTürkçeTurkishSputnik ایرانPersianPersianSputnik افغانستانDariDari
Central Asia
ҚазақстанҚазақ тіліKazakhКыргызстанКыргызчаKyrgyzOʻzbekistonЎзбекчаUzbekТоҷикистонТоҷикӣTajik
East & Southeast Asia
Việt NamTiếng ViệtVietnamese日本日本語Japanese中国中文Chinese
South America
BrasilPortuguêsPortuguese
NewsfeedBreaking
22:32 GMTRoger Stone Calls FBI 'Biden's Personal Gestapo' While Speaking of Jan. 6 Committee Subpoena
22:05 GMTJennifer Lopez Feels Her Reunion With Ben Affleck Is 'Truly Meant To Be,' Report Says
21:43 GMTUS Transport Sec Buttigieg Wriggles on Ridiculed 'Racist Roads' Comments
21:05 GMTNew Jersey School to Remove President Woodrow Wilson's Name Over Racism Legacy
21:01 GMTTrump's Super PAC to Hold Biggest Fundraiser Yet Amid Biden's Sinking Polls - Report
20:56 GMTFrance Blames UK for Channel Drownings for Being 'Too Attractive' to Migrants
19:46 GMTWHO: Data Insufficient to Conclude Omicron More Dangerous Than Delta
19:02 GMTUS Reportedly Sends Two Military Convoys to Syria Consisting of Over 100 Vehicles
18:24 GMTTaiwan Scrambles Jets to Fend Off 27 Chinese Military Aircraft
18:09 GMTBelarusian Security Council Says Kiev Stirring Up Migration Issue to Get Money From West
18:03 GMTPresident Ramaphosa Delivers Speech on South Africa's COVID Fight Amid Spread of Omicron Strain
17:52 GMTSouth African Doctor Says 'Mild' COVID-19 Variant Omicron Already 'Seeded' in UK
17:38 GMTPoll: Kamala Harris & Michelle Obama Dems' Top Choices for 2024 Race If Joe Biden Decides Not to Run
17:27 GMTHunter Biden Received 3-Carat Diamond on Top of $10M a Year Deal With Chinese Businessman, Book Says
17:17 GMTWill the Maxwell Trial Expose Epstein's Rich & Powerful Friends or Turn Into Another Cover-Up?
17:12 GMTSouth Africa's Health Minister Unhappy With International Reaction to Omicron Strain
16:32 GMTKremlin: Anti-Russian Campaign Could Be Used to Distract From Kiev’s Possible Military Op in Donbass
16:11 GMTGermany Warns US Congress Nord Stream 2 Sanctions Will 'Damage Transatlantic Unity', Docs Show
15:54 GMTPrince Harry Lashed Out at Prince William Who Asked Him Not to Rush Things With Meghan, Book Claims
15:45 GMTPoland Ready to Help Finance Return of Migrants Stuck at Border With Belarus to Home Countries