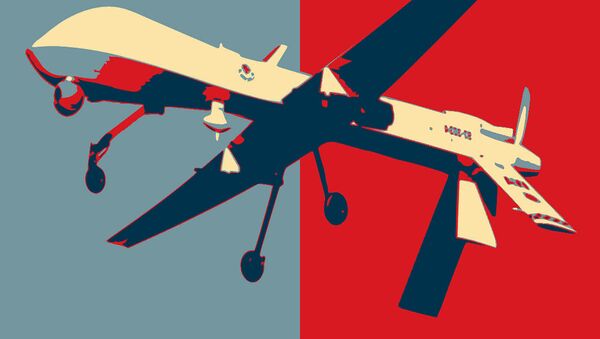 While railing against domestic gun violence, the US president is placing high-tech weapons in the hands of dictators, scoring record profits for corporations that make killing machines.

In an editorial published on Wednesday, Truthout’s Owen McCormack took President Obama to task, blasting him as the "Arms Dealer in Chief." In the piece, McCormack points out that, while Obama calls for stricter domestic gun control, the US president has also spearheaded a proliferation of arms sales to foreign governments.

"At BarackObama.com, for example, President Obama is described as a purveyor of peace who is at odds with an unenlightened Congress," writes McCormack.

Meanwhile, the US State Department’s "World Military Expenditures and Arms Transfers 2014" report shows that "during the period of 2001-2011, more than 77% of the world arms trade, by value, was supplied by the United States." The report says that in recent years, “the US share of the world arms market appears to have grown."

McCormack suggests that the US is profitably encouraging carnage in the Middle East, Central Asia and North Africa, solely for the purpose of increasing the demand for US weapons and military equipment. "As conflicts reach hideous levels of depravity, the demand for state-of-the-art weaponry has increased substantially," writes McCormack.

The US prides itself as being the primary exporter of democracy, but government reports show that the Obama Administration does not discriminate when it comes to arms sales, even if the purchasing country is a dictatorship or politically and socially unstable. Governments in Saudi Arabia and Pakistan are primary importers of US-made weaponry, and analysts suggest that many of those weapons are ultimately used by terror organizations against US personnel.

The Wahhabist regime in Saudi Arabia, America’s leading customer in the arms trade, has notably funded terrorist organizations and various proxy wars throughout the Middle East. In 2010, the Obama administration authorized a whopping $90.4 billion in arms sales to the Saudi government.

Military weapons and equipment sold to Middle East dictators not only includes top-of-the-line fighter jets and ballistic missiles, but now also predator drones with "current worldwide UAV expenditures of $6.4 billion annually expected to grow to $11.5 billion annually within the next ten years."

Citing continuous US-sponsored regime changes in the Middle East, leaving countries descending into anarchy, McCormack writes that "one’s naiveté must reach new heights to believe that armed drones will not be sold on the black market to internationally recognized terrorist organizations and non-state actors."

Finally, McCormack raises a question that the Obama Administration hopes will not be asked: "How can a man who has weaponized the planet at a historic rate be championed as a purveyor of peace?"