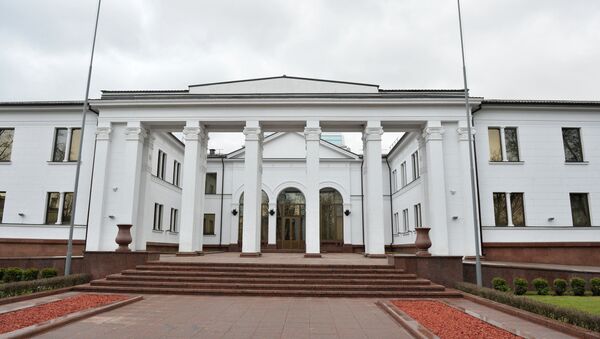 © Sputnik / Viktor Tolochko
/
Go to the photo bank
Subscribe
A new round of negotiations of the Trilateral Contact Group on the Ukrainian crisis settlement, as well as its subgroups, will be held in Minsk on Wednesday.

Minsk Preparing to Host Meeting of Contact Group on Ukraine
MINSK (Sputnik) – Earlier this month, the Donetsk People’s Republic’s (DPR) envoy to the talks, Denis Pushilin, announced that the meeting in Minsk would be held on March 23. Envoy from the Organization for Security and Co-operation in Europe (OSCE), Martin Sajdik later confirmed the date.

On Tuesday, Belarusian Foreign Ministry spokesman Dmitry Mironchik said that the ministry was preparing for the meeting of the contact group and its thematic subgroups.

The Trilateral Contact Group includes Ukrainian, Russian and OSCE representatives who have been tasked with enhancing the implementation of the Minsk peace agreements.

Earlier this week, a source close to the negotiations told RIA Novosti that the contact group meeting will be preceded by the talks of four thematic subgroups. The formation of the subgroups of the Contact Group on Ukrainian reconciliation on political, economic, humanitarian and security issues was stipulated by the Minsk ceasefire agreement.

According to the source, the subgroup on humanitarian affairs will continue to work on the release of prisoners and illegally detained persons. Also, according to the source, the Ukrainian side intends to raise the question of the fate of Ukrainian military helicopter pilot Nadezhda Savchenko, who was found guilty in the killing of two Russian reporters, and the ban for Ukraine’s representative in the humanitarian subgroup Irina Gerashchenko to enter Russia.

Southeastern Ukraine has been suffering from a crisis triggered by a military operation launched by Kiev authorities against local militias in the regions of Donetsk and Luhansk in April 2014. The regions have refused to recognize the pro-Western government in Kiev that came to power in 2014 in what they consider to have been a coup.