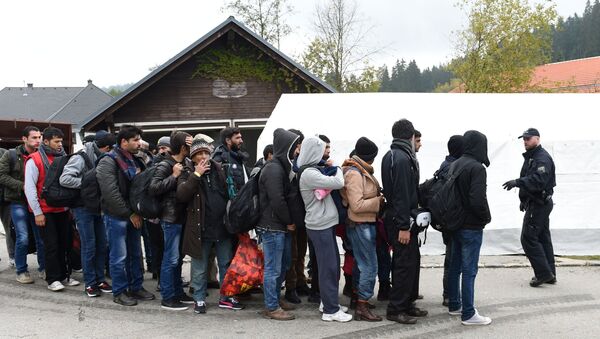 © AFP 2022 / CHRISTOF STACHE
Subscribe
The Bavarian Prime Minister's statement to the German newspaper Das Bild that the country's migrant policy has completely changed is a political signal that will be tested during the summer months, Charles Lees, professor of politics at the University of Bath, told Sputnik.

The Prime Minister of Bavaria Horst Seehofer has told Das Bild that Germany's refugee policy has completely changed, but how the EU deals with the flow of migrants during the summer months will be the real test, Charles Lees, professor of politics at the University of Bath, told Radio Sputnik.

​"If we take it at face value, it's intended to send a signal to refugees that Germany is no longer open in the way that it declared itself to be last autumn," Charles Lees, professor of politics at the University of Bath, told Radio Sputnik.

"This would lessen the pressure as well on transit countries such as Greece in the medium term," said Lees, but warned that while it remains relatively easy to make such a statement at the beginning of the year when there are fewer refugees, a change in policy will be tested more in the summer months.

In the interview with Das Bild, the Bavarian Prime Minister reiterated that his party, the Christian Social Union (CSU), sister party of Angela Merkel's Christian Democratic Union (CDU), wants to impose an annual cap of 200,000 asylum seekers in Germany.

Seehofer said that refugees and migrants must be stopped at Europe's borders, or at internal borders if they slip through, and that an immediate decision must be made on whether to let them in. He described this solution as "more humane" than rejection after a lengthy asylum process.

"The federal government has changed its refugee policy completely, even if they don't admit it," Seehofer told the paper.

"There has been a creeping turn away from the unconditional welcoming culture. In spite of the pictures from the Greek-Macedonian border, no German politician is saying today, 'open the borders, everybody come to Germany.' The 200,000 limit will probably not even be reached this year, although it is not thanks to the federal government." the politician said.

Professor Lees told Sputnik that Seehofer's declaration about the cap not only puts pressure on German politicians to enforce the limit, but also forces other EU countries to be explicit about how many asylum seekers they will take.

"An interesting side effect of this cap, which is obviously a big reduction of the numbers that Germany has taken in to date, is that it actually puts quite a lot of pressure on other countries to increase their caps, if we think about the UK for example, which has pledged to take a much smaller number of refugees," Lees said. 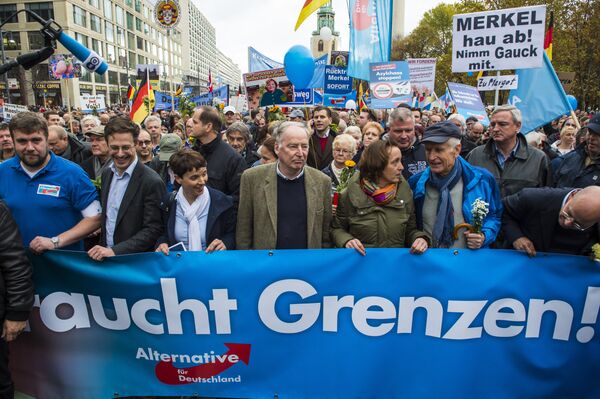 Frauke Petry (3rd, L), chairman of the right-wing populist Alternative for Germany (AfD) party, and the AfD's leading politician Alexander Gauland (4th, L) hold a banner reading "Asylum needs limits" during a demonstration against the German government's asylum policy organized by the AfD party in Berlin on November 7, 2015.
© AFP 2022 / John Macdougall
Lees said that Angela's Merkel's decision to make a deal with Ankara that facilitates the deportation of migrants from Europe to Turkey is a consequence of disastrous results for the CDU and Germany's Social Democratic Party (SPD) in local elections in three states earlier this month, and gains for the right wing anti-immigrant Alternative for Germany (AfD) party.

"It's essentially a way of trying to signal to the German public that the German government is reacting positively, it's proactive in the way it's approaching the refugee crisis."

Record 2Mln Foreigners Registered in Germany in 2015
"But again it's pretty vague – the practicalities of sending people back in a one for one deal are actually quite complex, and the political dimension of this is actually quite tricky as well," he said, adding that some EU states and NGO's have warned that the deal gives tacit acceptance to human rights abuses by the Turkish government.

"Even in the German domestic context, the CSU is worried that visa freedoms for Turkish citizens will lead to a new flow of migrants into Germany, in particular Kurdish migrants trying to flee the crisis in North Syria and also the increasing troubles in southern Turkey between the Turkish majority and the Kurdish population."

We Don't Want More Refugees, Warns Danish Ambassador to Germany
While Angela Merkel has used a lot of hard-won political capital during the migrant crisis, she has few obvious rivals or successors, Lees said.

"To her advantage, paradoxically, one or two of the people tipped to possibly succeed her as leader of the CDU didn't do particularly well in the state elections," he said.

"The SPD, the center-left Social Democratic party which is coalition partner of the CDU/CSU at the moment but nevertheless is the possible alternative government to Merkel's, is very weak and indecisive regarding this issue as well, so she's got no real foreseeable successors at the moment and I wouldn't write her off just yet."