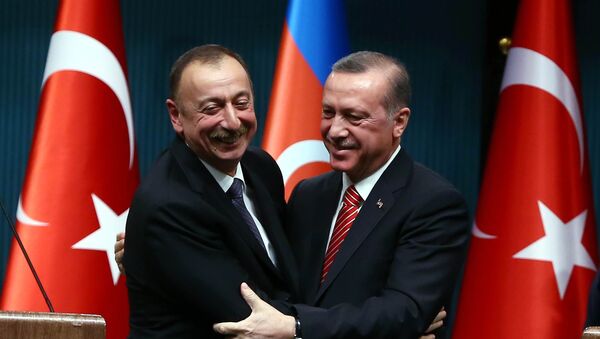 © AFP 2022 / KAYHAN OZER
Subscribe
Turkey is attempting to enlist the leaders of Russia’s neighbors, former Soviet republics involved in regional conflicts, into a group of allies against Russia with the potential to inflame long-fermenting conflicts at Russia’s borders, according to an expert in the Caucasus Artur Ataev.

Blame Game Turkish Style or Erdogan’s Propaganda War
Ataev, Senior Researcher at the Russian Institute for Strategic Studies (RISS), cites as an example Turkish cooperation with Azerbaijan, once a party to an ethnic military conflict with Armenia (1988 – May 1994) over the self-declared enclave of Nagorny Karabakh, a former region of Azerbaijan, populated primarily by ethnic Armenians.

Pursuant to the 1994 ceasefire agreement, the self-declared republic has been left in the hands of the ethnic Armenians backed by neighboring Armenia.

Negotiations have so far failed to produce a permanent peace agreement, and the dispute remains one of post-Soviet Europe's "frozen conflicts."
Ataev notes that Recep Tayyip Erdogan might provoke the instigation of the long-fermenting conflict, as it is beneficial to Erdogan in particular, his political environment and the Turkish economy.

"This scenario, this matrix has already been tested during the Second World War," Ataev said in an interview with Russia’s online newspaper Lenta.ru.

“When some particular state was drawn into the war, the country which pulled it in got all the dividends,” he said, adding that it is now Turkey which could perform such a role.

Georgia, Turkey, Azerbaijan Sign Joint Declaration on Cooperation
Another example of the above statement is Turkey’s support of the Crimean Tatars in hope that they would help Ukraine to “get back” the Crimean Peninsula.

In the South Caucasus, Turkey is targeting Georgia. During his February visit to the country, Turkish Foreign Minister Mevlüt Çavuşoğlu announced that Turkey supports the membership of Georgia into NATO and is promoting its entrance bid.

Ataev noted that the reciprocal response of the Georgian foreign minister shows that Georgia is set on a course of becoming Turkey’s ally.

Speaking at the press conference, Georgian Foreign Minister Mikheil Janelidze said that Georgia perceives Turkey as “the closest friendly state,” and that this is reflected in the relations between the two countries.

On Guard, or En Garde? How Russia Sees Security Risks South of Its Borders
Turkish business and Turkish political elite, Ataev noted, are able to work with political elites and businesses of other countries. They successfully search for lobbyists of their own interests in the ranks of foreign businessmen and politicians.

And this is Turkey’s way of trying to set up a group of allies out of Russia’s adversaries.

The pro-Turkish projects, the expert says, have grown up in Azerbaijan, Georgia, Russia’s Tatarstan, Moldova and Ukraine, in Central Asia.