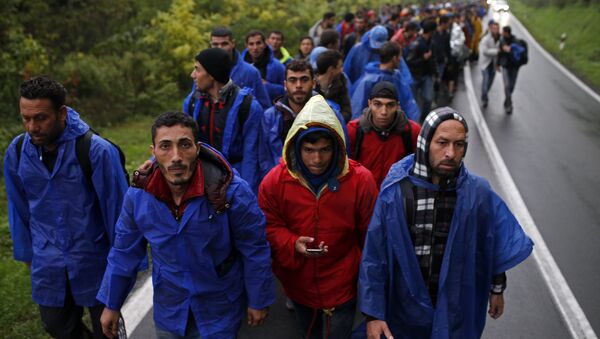 © REUTERS / Dado Ruvic
Subscribe
International
India
Africa
Three obviously adult asylum seekers have been thrown out of an accommodation for unaccompanied refugee children in Sollefteå in northern Sweden. The decision was criticized by the Swedish national broadcasting company SVT.

According to the Sollefteå municipality, there was no doubt that the three ejected people are adults.

Former Swedish PM Urges Country to Shut Up and Love Refugees
"And we're not talking about a year's margin here. We are positive that these are adults who do not belong in a refugee accommodation for unaccompanied children. We should not house adults living together with children," said Majed Safaee at Sollefteå municipality.

The decision was taken in consultation with the Swedish Migration Board. SVT in the northern province of Västerbotten is nevertheless critical of the municipality still insists that the people to be ejected, despite everything, are in fact children.

"Is a feeling sufficient reason for a child to lose its status as unaccompanied?" questions SVT in a preamble to its article. SVT asks whether it is "correct and safe" to take this kind of decision based on a "subjective judgment." The municipal assessment of refugee children has until now been based on the staff's feelings and experience, such as "looks physically older," and "is asking adult questions."

Cold Shoulder: Norway's Rejected Refugees Dumped Off in Arctic Russia
Age determination of refugee children has been a largely controversial issue in Sweden. Medical studies claim to have proved that current age evaluation methods are unsafe with a margin of error of up to four years. In an article in the medical newspaper Läkartidningen different psychosocial methods were analyzed and discussed, but they nonetheless remain mainly untested in Sweden. Instead age analysis is based on interviews, which are not always carried out by experienced staff.

Correct age assessment has become a large problem for Sweden, where grown-up refugees, sporting beards, are widely reported to abuse the loopholes in the authorities' excessively warm welcoming of refugees in order to harvest more privileges. A growing number of outrageous age manipulation cases has even given rise to the colloquial meme "Stefan Löfven's bearded children" after Sweden's PM currently in charge.

Age assessment has been appealed in Sollefteå, and the verdict in the case is believed to set a precedent for its numerous counterparts all over the country.