Surprised? Pentagon Lied About How Many US Troops Are in Iraq 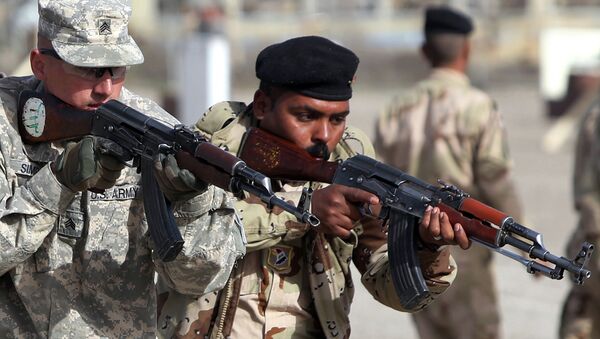 © AFP 2023 / AHMAD AL-RUBAYE
Subscribe
International
India
Africa
The Defense Department continues to claim that there are only 3,800 troops deployed in Iraq, but new information shows that the number may be much higher as the US combats Daesh in Northern Iraq.

On Monday, a Baghdad-based Pentagon spokesman for the US effort in Iraq stated he had been ordered by superiors not to divulge the total US troop presence in Iraq. For months, the Pentagon has refused to release the total number of troops, despite claiming that the full force has remained steady at some 3,800. Military and defense analysts, however, suspect that the true number may be hundreds higher.

The size of the US deployment in Iraq was called into question following the death of a US Marine on an undisclosed mission on Saturday. The Marine died when Daesh fighters fired two Katyusha rockets that struck a military outpost in the country’s north. The death forced the Pentagon to confirm the deployment of the 26th Marine Expeditionary Unit (MEU), a 200-person force.

The 26th MEU’s deployment is not included in the number of publicly acknowledged troops on the ground in Iraq, suggesting that the actual size of America’s deployment in the region may be vastly higher than officially reported.

To date, the official number has been capped at 3,870, after President Obama campaigned on a promise to draw down troop numbers. The emergence of Daesh in the north, however, has likely forced the US to expand their regional military presence.

The Defense Department spokesman in Iraq, Col. Steven Warren, stated that the government’s official position is to not count troops who are on "temporary deployments" in Iraq, which includes not only the Marines in northern Iraq, but also at least 100 US military advisors.

World
US, Cuba Continue to Have Deep Differences on Human Rights – Obama

In response to inquiries regarding why the presence of the US Marine outpost, known as Firebase Bell, was not disclosed to the public prior to Saturday’s attack, Warren cited the need to keep the information secret until the Marine force became "fully operational and were ready to fight."

The outpost suffered a second attack Monday morning when "a squad-sized element" of Daesh fighters engaged in a shooting attack. US Marines returned fire, reportedly killing two fighters. There were no Marine casualties in the firefight.