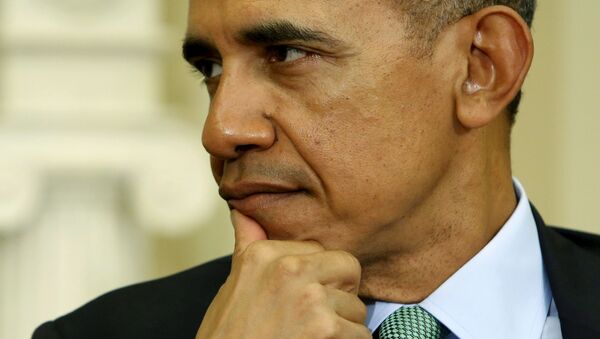 © REUTERS / Jonathan Ernst
Subscribe
International
India
Africa
US President Barack Obama said that an opportunity to meet former Cuban President Fidel Castro and put a symbolic end to Cold War tensions between the United States and Cuba would be welcome.

Next US-Cuba Human Rights Dialogue to Take Place in Havana in 2016 - Obama
WASHINGTON (Sputnik) — An opportunity to meet former Cuban President Fidel Castro and put a symbolic end to Cold War tensions between the United States and Cuba would be welcome, US President Barack Obama said during an interview in Havana.

"I would be happy to meet with him [Fidel Castro], just as a symbol of the end of or the closing of this Cold War chapter in our mutual histories," Obama told ABC News.

Earlier in March, US Deputy National Security Advisor Ben Rhodes said the White House had ruled out a meeting between Obama and Fidel Castro, and that it was something they "certainly wouldn't seek."

Obama said he would meet with Castro if the former Cuban president was in better health, according to the interview.

"It’s not clear to me what the state of his health is," Obama said, adding that he had "no idea" if the meeting with Castro could ever happen.

The United States severed all diplomatic relations with Cuba in 1961 in a culmination of a deteriorating relationship that worsened in the late 1950s as a direct result of the Cuban Revolution and communist reforms introduced by President Fidel Castro, while Cold War tensions ran high between Washington and Moscow.

Earlier on Monday, Obama met with current Cuban President Raul Castro to discuss the normalization of relations and economic opportunities between the two countries, along with contentious issues like human rights and the future of Guantanamo Bay.

Obama’s two day visit to Cuba marks the first time a US president stepped foot on the island nation in more than 90 years.