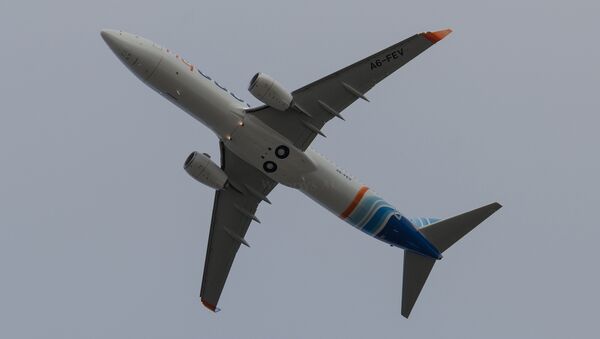 © Flickr / Woodys Aeroimages
Subscribe
A security monitoring system introduced by the FlyDubai airline, which operated the flight that crashed in Russia last week, prevents crew members from working on flights if they have not had sufficient rest before departure, a spokesperson for the airline said Tuesday.

Ex-FlyDubai Pilot Says Co-Pilot of Crashed Boeing Was ’Fatigued, Exhausted’
DUBAI (Sputnik) – Earlier in the day, a former FlyDubai pilot said in an interview with the RT broadcaster that the co-pilot of the crashed plane was extremely exhausted after working 11 days in a row ahead of the fatal flight. The pilot added that excessive workloads were common for pilots with the airline as the operator arranged schedules that did not allow enough rest time between flights.

"If a crew member feels that he has not had a chance to have a rest for required time before the flight for any reasons, the security monitoring system makes pilots declare themselves unfit to perform the flight," the spokesperson told RIA Novosti.

He added that the company strictly adhered to the service instructions, while scheduling working hours, and payed a special attention to factors affecting crew fatigue, including the duration of their previous shifts and the number of the rest days.

000000
Popular comments
Yes, these airlines all say this, but should a pilot really report unfit for flight, measures are taken to get rid of such pilots. It is easy to fail them on the reoccurring 6 months proficiency checks. That is a trick management uses to sack pilots together with an examiner that are told what to do, otherwise....
Robert Klimenko
22 March 2016, 21:40 GMT2
000000
Medication after deaths.