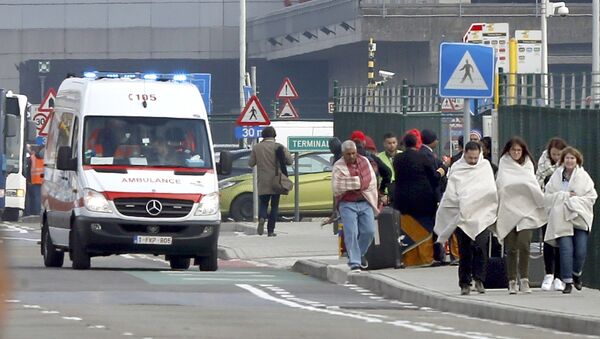 Security is tight in Brussels, which remains fully closed following a series of deadly terrorist attacks on the city's Zaventem airport and the Maalbeek metro station, Anastasia Shibanova, a Russian eyewitness told Sputnik.

Social Media Users React With Grief, Defiance to Brussels Terror Attacks
In an interview with Sputnik, Anastasia Shibanova, a Russian eyewitness, said that police officers can currently be seen all across the Belgian capital Brussels, which was hit by an array of deadly terrorist attacks earlier in the day.

According to her, the entire Brussels metro system was shut down shortly after a terror attack on the Maalbeek station took place.

"This occurred at 9:45 local time. Coming up to a metro station entrance, I saw plenty of police officers with Kalashnikov assault rifles. I decided to wait for a while at a nearby shop, but when I went out I saw the metro closed down," she said.

She added that police are now checking all transport vehicles across the city, and that the railway stations are already shut. 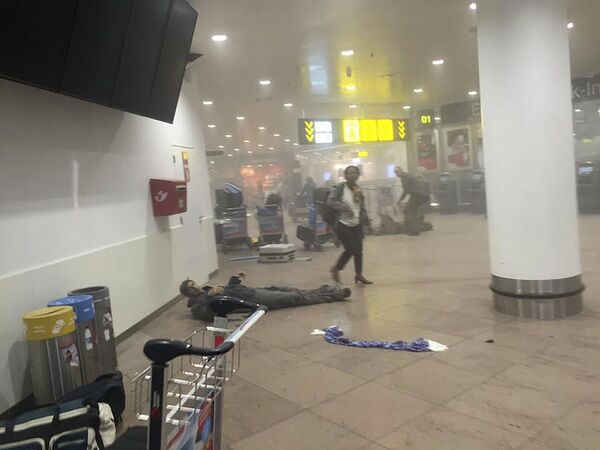 An injured man lies at the scene of explosions at Zaventem airport near Brussels, Belgium, March 22, 2016
© REUTERS / Ketevan Kardava/Courtesy of 1tv.ge

"There are a total of three such stations in Brussels, located in the city's central, southern and northern areas. Right now, my friends are stranded at the Southern Railway Station, which remains closed," she said.

In a separate interview with Sputnik, Estonia's member of the European Parliament (MEP) Yana Toom, said, for her part, that she had been a mere 40 meters from the site of the terror attack on Zaventem airport.

"I was quite close to the site of the attack, and then a security officer ordered us to run in the direction that he indicated. All those present at the airport were immediately evacuated, and we're currently standing on the tarmac, unaware of the latest developments," Toom said.

Latvian MEP Andrey Mamykin, who was at a session of the Parliament's Foreign Affairs Committee when the terror attacks occurred, heaped praise on efforts by Belgian special services to prevent the explosions.

"The special services worked hard and they managed to neutralize a lot of explosive devices at the airport and at metro stations. Unfortunately, some explosives were detonated, with the death toll expected to grow in the coming hours," he told Radio Sputnik.

Europe Terror: UK Security on High Alert as PM Chairs Emergency Meeting
A series of blasts hit the Belgian capital earlier on Tuesday, including two explosions in Brussels' Zaventem airport that left 14 people dead and 81 injured. At least 20 people were reportedly killed in explosions at the metro stations in central Brussels, 73 were injured.

The blasts came just days after Salah Abdeslam, the mastermind behind the November Paris Attacks, was arrested in Belgium.