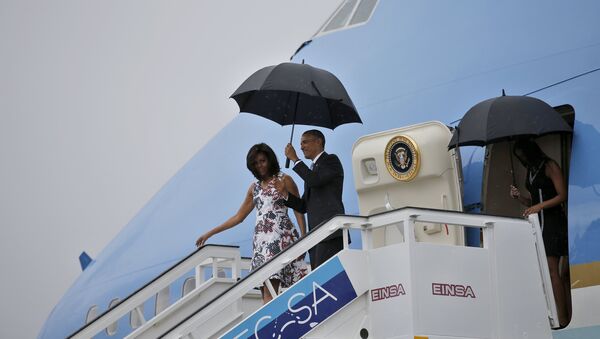 © REUTERS / Carlos Barria
Subscribe
US President Barack Obama, who arrived in Cuba on Sunday, called his visit to the island nation a historic opportunity, according to the press report published by the White House.

HAVANA (Sputnik) – Obama arrived in the Cuban capital of Havana with a historic visit in the wake of the Cuban normalization process.

On Monday, when the official program of his visit begins, the US President is scheduled to meet with Cuban President Raul Castro to review progress made on the normalization of relations between the two nations.

"This is a historic visit and a historic opportunity," the US President stated, when meeting with the staff of the US embassy in Cuba during his first stop in the country, that took place at the Melia Habana hotel instead of the embassy grounds due to rainy weather.

Obama became the first sitting US president to visit Cuba since Calvin Coolidge sailed into Havana aboard a US battleship in 1928.

"Back in 1928, President Coolidge came on a battleship, it took him three days to get here. It only took me three hours."

Last time the President of the United States visited Cuba was Calvin Coolidge in 1928. Today, Obama changed that. pic.twitter.com/eIG0tVpIC3

​The President also thanked the embassy staff for their work, and addressed to those who worked in Cuba during the years of the blockade.

"I know it's been a pretty busy seven months…. But I want you to know, everyone we've accomplished so far… It's all happening because of you. Every day you're bringing the US and Cuba closer together."

The Obama family then went for a walk in Old Havana, and is set to meet Cardinal Jaime Ortega at the Cathedral.

Relations between Washington and Havana began to improve after Obama announced in December 2014 a historic change in US policy, including the loosening of restrictions on travel and trade.