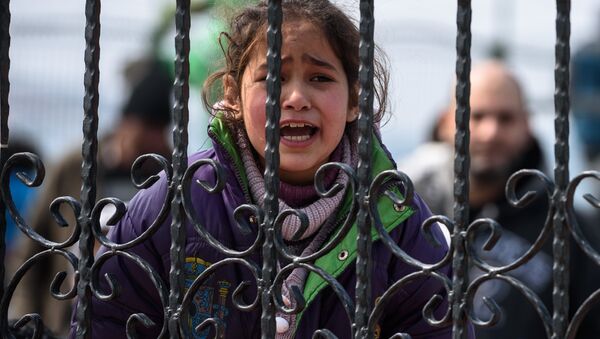 The port of Piraeus in Athens shows the "effects of Europe's utter failure to respond collectively and compassionately to people seeking protection," according to Human Rights Watch after more than 5,000 migrants were pushed off the Greek island of Lesbos and sent to temporary shelters on the mainland.

2000+ years after the Battle of Salamis, the battle of humanity in the Aegean & Piraeus#Greece #RefugeesWelcome pic.twitter.com/cKwbRs56ji

Piraeus, the busiest port in Athens is now home to the thousands of men, women and children transported from the islands with nowhere to go. Around 875 new refugees arrived at four Greek islands over the weekend — and a ferry transported 1,169 migrants to the mainland near Athens.

According to campaign group Human Rights Watch, over 4,000 men, women and children are sleeping in old warehouses, tens and under trucks. They are just some of the 44,000 people who are trapped in Greece following border closures along the Western Balkan route, where more than 10,500 people remain stuck on the country's border with Macedonia.

Piraeus is also used by tourists during summer months to travel to the Greek islands. Tourism accounts for a fifth of the country's US$191.17 billion economy, employing one in five people. After near-bankruptcy the country is desperate to hang on to its tourism industry.

Greece is also in the process of building 'hotspots' on five Greek islands, including Kos which is one of Greece's most popular destinations for holidaymakers — and refugees. The mayor of Kos recently expressed concern that shelters on the island would put tourists off, damaging its largest income generator.

“Kos Made Of Summer” is the new tourism campaign for the Greek island of #Kos! "A special tourism promotion plan was…

However, many more refugees and migrants are arriving in Greece with no idea about a recent deal struck between the European Union and Turkey stipulating that all migrants arriving in the country will be sent back across the Aegean Sea to Turkey.

If it were them, would they trust their fate to summary processing in Greece and a mass return to Turkey? pic.twitter.com/3pbeY5CBYM

Despite the closure of the Western Balkan route and the recent deal with Turkey, many migrants remain determined to reach Europe. Anyone visiting Piraeus this summer will be directly faced with the reality — and legacy — of the refugee crisis in Europe.