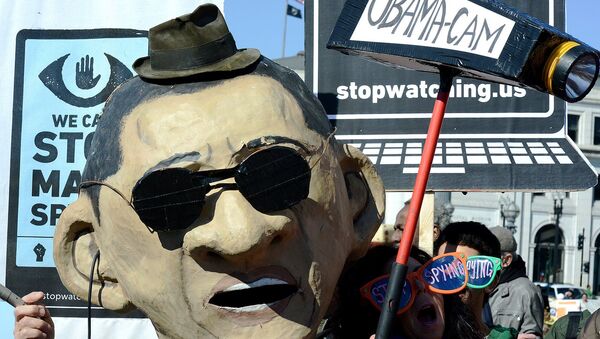 © Flickr / Stephen Melkisethian
Subscribe
The proposed agreement between the US and the EU on data transfers - the replacement of the Safe Harbor agreement known as Privacy Shield - do not contain sufficient safeguards on the protection of privacy, human rights groups have said.

Privacy Shield is the proposed new deal between the EU and the US that is supposed to safeguard all personal data on EU citizens held on computer systems in the US from being subject to mass surveillance by the US National Security Agency.

"Privacy Shield represents a step backwards for the scope and definition to the right of privacy," said Marc Rotenberg, president and Executive Director of the US-based Electronic Privacy Information Center.

It will take a lot of work to fix #PrivacyShield. For now, @EuroParliament should require end of 702. @EPICprivacy https://t.co/lxdA0nwPjr

The agreement has been under negotiation for months ever since the European Court of Justice ruled in October 2015 that the previous EU-US data agreement — Safe Harbor — was invalid. The issue arises from the strict EU laws — enshrined in the Charter of Fundamental Rights of the European Union — to the privacy of their personal data.

MEPs Call for Clarity on EU-US Data Transfers Over Privacy Fears
The new proposed replacement — known as Privacy Shield — has been agreed after months of negotiation between the US and the EU and promises that: "for the first time, the US government has given the EU written assurance from the Office of the Director of National Intelligence that any access of public authorities for national security purposes will be subject to clear limitations, safeguards and oversight mechanisms, preventing generalized access to personal data […] through an Ombudsperson mechanism within the Department of State, who will be independent from national security services".

Speaking before the European Parliament on Privacy Shield, Rotenberg outlined several flaws in the proposed EU-US data transfer agreement, including a weak privacy framework, lack of enforcement, and a cumbersome redress mechanism.

In the short term, Rotenberg recommended that the EU condition acceptance of the Privacy Shield on the end of the '702 program' which permits bulk surveillance on Europeans by the US. EPIC along with other NGOs has urged the European Commission to rewrite the Privacy Shield, saying it fails to safeguard human rights and does not reflect changes in US law as required by the Schrems decision.