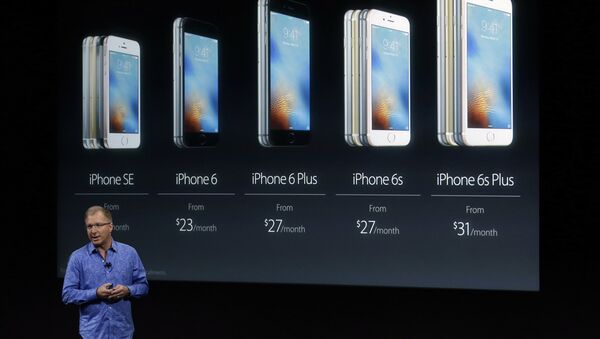 During an event in Cupertino, California, Apple has unveiled new products, including the iPhone SE and a smaller iPad pro.

The iPhone SE is being offered with the cheapest introductory price for any iPhone, from $399. With a four-inch screen, the new device is comparable in size to the iPhone 5S, but with processing power similar to the 6S.

The company hopes that the smaller price tag will open up mid-tier markets.

Apple’s new tablet features a 9.7-inch screen, smaller than the iPad Pro released last year. It includes a "True Tone" display with light sensors to adjust to warmer or cooler colors depending on ambient light.

Similar to the SE, the new iPad will feature a 12-megapixel camera capable of capturing live photos in 4K.

Liam will operate at a site near Apple headquarters in Cupertino, but the company plans to install a second robotic disassembly system in Europe.

During Monday’s event, Chief Executive Tim Cook released a statement defending Apple’s refusal to rewrite its operating system so that the FBI could unlock one iPhone owned by the employer of one of the San Bernardino shooters. Noting the government agency’s history with regards to privacy, Cook said that Apple has a responsibility to protect consumer data, saying that his company "will not shrink from that duty."

"We need to decide as a nation how much power the government should have over our data," Cook added.