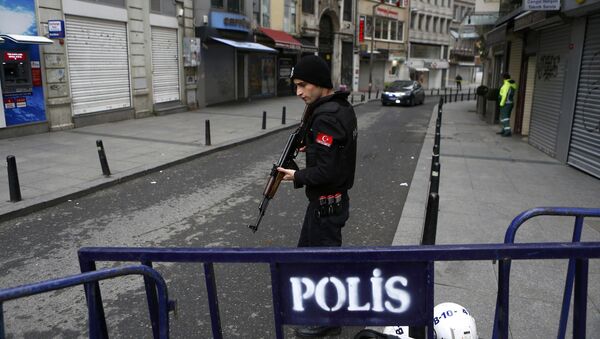 Turkish authorities have identified a perpetrator of the most recent deadly terror attack in the central part of country's largest city of Istanbul as an alleged member of Daesh terrorist group, local media reported Sunday.

MOSCOW (Sputnik) — On Saturday, the suicide blast ripped through a major tourist street in Istanbul, killing five people including the attacker, and injuring at least 36 people.

Turkish Interior Minister Efkan Ala confirmed on Sunday that a Daesh-linked suicide bomber was behind the recent deadly attack in Istanbul.

"According to the current findings, that [a suicide bomber] was Mehmet Ozturk, who was Daesh-linked…He had not been registered by the police…Five people have been detained over links to the terrorist act," Ala said while speaking at his ministry.

One Suspect Detained As Part of Investigation Into Deadly Istanbul Bombing
According to the Turkish Health Ministry, the citizens of Israel, Germany, Iceland, Iran and the United Arab Emirates were among the injured people.

According to the Turkish Minute news website, Mehmet Ozturk, whose father's DNA matched with the sample taken from the suicide bomber, had allegedly gone to the war-torn Syria to join Daesh ranks.