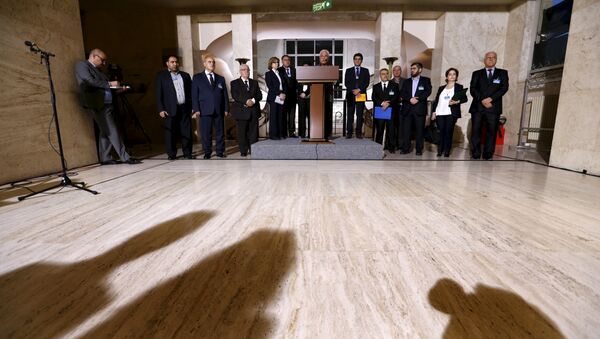 GENEVA (Sputnik) – Geneva is currently hosting proximity talks between the Syrian opposition and the government's delegation. Negotiators seek to put an end to the civil war that has been raging in Syria since 2011.

"We are calling on Russia to put pressure on the regime to approach these talks seriously, " HNC Yahya Al-Kodmani told journalists in Geneva, Switzerland.

Al-Kodmani specifically accused the Syrian government of not taking the issue of President Bashar Assad’s future in Syria seriously enough during the ongoing proximity talks.

"We have noticed the regime is still refusing any serious discussion on the fate of Assad's presidency."

The role that the embattled Syrian president should have in Syria’s future has been a major point of contention in the UN-mediated talks, alongside with the creation of a national unity government and elections.

"We consider that these elections are not legitimate," HNC Deputy Coordinator Yahya Al-Kodmani told reporters in Geneva.

HNC also insists that the second round of intra-Syrian peace talks should take place in early April, as agreed earlier.

"The regime asked to postpone the second round for two weeks. But we insist on having it in due time. Regime is trying to avoid fulfilling all its duties."

HNC spokesman Salem Al-Meslet told journalists that the opposition group could not afford any delay.