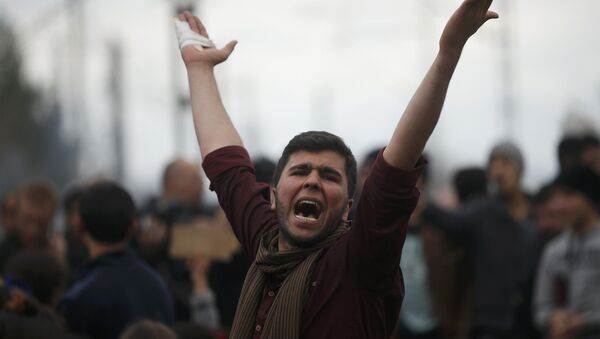 At least 875 migrants arrived in Greece in the last 24 hours despite the EU-Turkey agreement, stating that all undocumented migrants who crossed waters from Turkey toward Greece will be returned back, UK media reported.

MOSCOW (Sputnik) — According to the ITV broadcaster, twelve boats with refugees had already arrived on Sunday on shoreline of the Greek island of Lesbos despite the threat of being returned to Turkey.

Earlier in March, Brussels and Ankara struck a deal, which will see all migrants arriving illegally from Turkey to Greece starting from March 20 returned back. In exchange, the EU will resettle thousands of Syrian refugees directly from Turkey.

According to the broadcaster, the agreement is expected to take effect from April 4.

Thousands of Migrants Stage ‘Carnival of Refugees’ in Berlin
As part of the deal, the European Union is expected to accelerate Turkey's EU accession process and introduce a visa-free regime between Turkey and Europe, as well as granting a total of 3 billion euros (over $3.3 billion) to Turkey to help it provide for refugees on its soil. An additional 3 billion euro in assistance to Ankara can be given by 2018.