Sex and Daesh or Arabian Nights Outside In 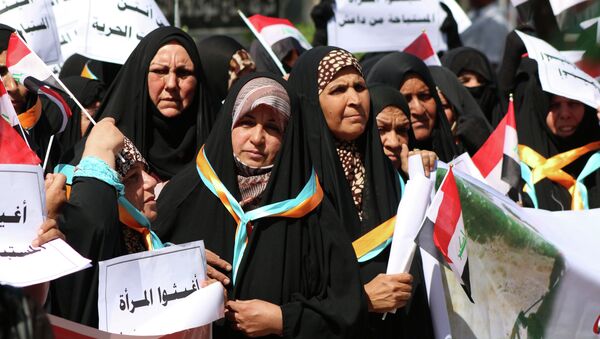 Domination over women and control over their bodies is one of the greatest dreams of Daesh terrorists. How else to explain the atrocities they commit against women without any plausible religious reason?

The inferiority of women is at the heart of Daeshism

It is not only about keeping women at home away from political and social life, but also about making them an object of domination and as means of demonstrating male superiority and the power that these young jihadists have not had elsewhere, Fawzia Zouari wrote.

Daesh allows everything, including rape

According to the author, this concept of a woman devoid of intellect and willpower opens the door to the empire of sex. Daesh allows everything, including rape.

“In this sense, it is an empire of lust hiding under the disguise of puritanism, a brothel with a religious front, a combination of consumerism and lust, devoid of the idea of sin,” Fawzia Zouari noted.

The sexual abuse by Daesh are fatal to the idea of an Islam reconciled with sex just as much as a Western fantasy of torrid sex in the harems.

“Daesh is the anti-Arabian Nights par excellence. The Scheherazade are no more precise identity, they became itinerant ghosts, bodies without contours, slaves to some, combatants and suicide bombers for others,” the author continued.

What does Daesh say about contemporary Arab-Muslim societies?

Add to that the inability to practice polygamy to satisfy one’s libido.

“So what to do? And it is here that the Islamic State [Daesh] comes into play with its posse of hawras in tow,” Fawzia Zouari wrote in conclusion.