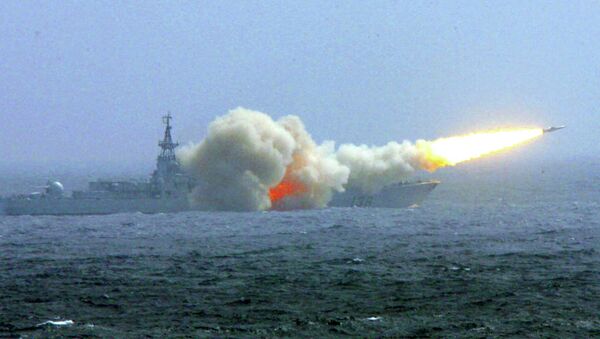 © AP Photo / Zha Chunming
Subscribe
China's newest battleship, currently known as the Type 055 guided missile destroyer, has been shrouded in mystery, but the Shipborne Weapons magazine has recently offered details of what has been dubbed as Asia's largest warship.

China Unveils New Electronic Spy Plane
The lack of information is understandable since "the ominous 'dreadnought' on the horizon," as expert on China's security policy Lyle Goldstein called the cruiser, is currently under development. The Pentagon estimated that it could enter construction phase in early 2016, but this has not been confirmed so far.

The Type 055 destroyers will also brandish long-range land attack cruise missiles and a sea-based missile interceptor. It will have ninety-six vertical launching systems, meaning the ship will not only be able to carry more weapons, but also larger missiles.

In addition, "the all-important phased array radars have been upgraded to include both X-band and S-band arrays – and thus may be on par with America's top air-defense ships," Goldstein quoted the magazine as saying.

Panic Reaches New Heights: 'Russia, China Planning Space Attacks on US'
The radars, the analyst added, "deliver the ship's core competence. Like the Aegis-equipped destroyers that formed the model for its predecessors, Type 055's main mission is still certain to be fleet air defense, including for Beijing's nascent carrier battle groups."

The Type 055 guided missile destroyer's other missions will likely include missile defense and "antisatellite" operations.