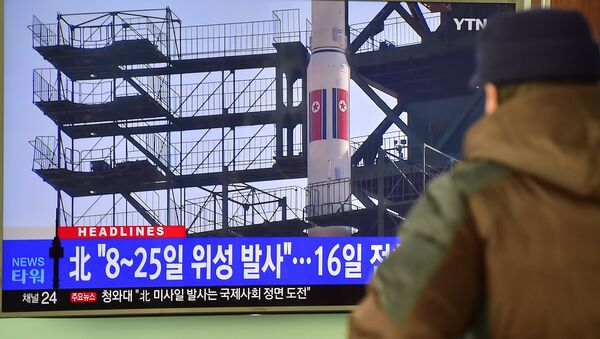 The tough new US economic sanctions against North Korea announced this week were likely to hurt the poorest and most vulnerable people in the country rather than its secure and entrenched leadership, experts told Sputnik.

WASHINGTON (Sputnik) — The latest US sanctions were imposed on Wednesday after North Korea launched its latest intercontinental ballistic missile on February 7 and tested its fourth underground nuclear device on January 6.

"[The sanctions] make the targeted population more desperate and more dependent on the government for their basic survival," Antiwar.com senior analyst Jason Ditz predicted. "Economic sanctions may devastate North Korea but [they will] only strengthens the government's hold on power."

Far from weakening the governments they were applied against, the new economic sanctions were more likely to strengthen the Pyongyang regime’s grip on power and inflict suffering on the poor and powerless parts of the population instead, Ditz explained.

"Sanctions are by their nature a very imprecise form of economic warfare, and even the most carefully designed sanctions must necessarily harm a nation's economy, and by extension do more damage to the most economically vulnerable citizens than it does to the targeted government," Ditz noted.

The process almost always boosted the power of the authoritarian regime rather than undermining it, he added.

"The question of whether the sanctions [will] work depends upon the goal and who is affected by them," California State University Emeritus Professor of Political Science Beau Grosscup, an author and terrorism analyst, told Sputnik.

"Depending on the scope, typically [sanctions] affect the daily lives of the general public and not the position of the regime. It also depends on who they are applied against," Grosscup observed.

Successive US governments had used contrary arguments to other nations about imposing sanctions depending where they thought American interests lay, Grosscup pointed out.

US administrations also applied sanctions against countries they intended to attack to prepare the way with justifications for the use of military force, Grosscup warned.