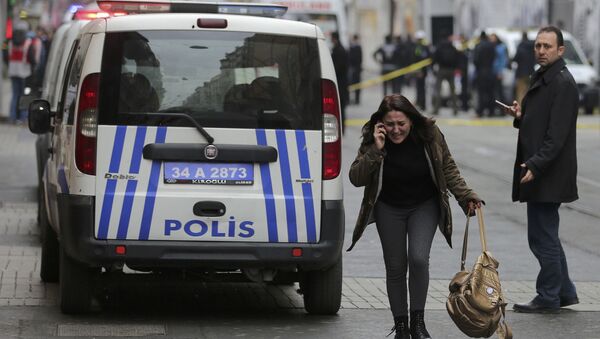 At least five people were killed and 36 were injured after suicide bomber detonated himself in one of the central streets in Istanbul.

#Turkey: reports of explosion on Istiklal in Taksim. It appears some people are wounded but few details. #Istanbul pic.twitter.com/o0TMi4nekH

​Explosion hit Istanbul's busy pedestrian Istiklal Street close to symbolic Taksim Square. At least five people were killed (inckuding the suicide bomber) and 36 were injured according to the Turkish Ministry of Health.

"Five people were killed in the suicide attack. There are 36 people currently in our hospitals, seven of them are in critical condition. There are 12 foreigners among the injured," Turkish Health Minister Mehmet Muezzinoglu told reporters.

Earlier in the day, Governor of Istanbul Province Vasip Sahin said that four people were killed and 20 were injured.

The police surrounded the area.

​​Counsulates of several countries are located in the area where the explosion occurred.

VIDEO: Security services rush to the scene of the explosion in #Istanbul #Turkey — @taylieli pic.twitter.com/SpSQgVgVqZ

The explosion occurred near the Beyoğlu administration building.