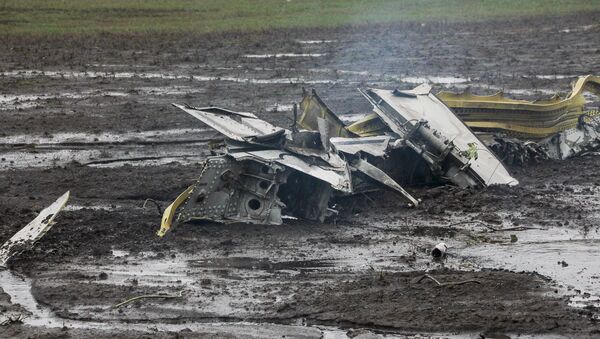 Tishkovets told reporters that it was too risky to attempt to land a plane in such severe meteorological conditions.

"In the vicinity of the landing field there was a rare phenomenon called ‘streaming flow,' which means that the speed of wind in the area exceeded 100 kilometers per hour, or 30 meters per second," the expert explained.

Russia
Black Boxes of FlyDubai Boeing Crashed in Rostov-on-Don Brought to Moscow
According to Tishkovets, the "streaming flow" usually occurs at a height of 5 kilometers, but in Rostov-on-Don it came down to a level of several hundred meters.

"The ‘streaming flow' could be observed at a height of 629 meters and outspread to almost 10 kilometers," he said. "Generally, planes try to avoid such phenomena, except for the situations when back wind is used deliberately to save fuel at a height of 9 kilometers."

The meteorologist added that there was no point waiting for conditions to improve, as the weather forecast remained unfavorable, and it was too risky to land a plane amid such conditions.

"I can't provide concrete data for the given vehicle, but from my own experience in the military service I can tell that there are restrictions for this kind of plane," Tishkovets said. "Takeoff and landing are prohibited for them at a certain speed of wind. For instance, critical speed of crosswind that allows landing for Tu-154 and certain models of Il is between 10 and 17 meters per second."

The FlyDubai Boeing-737-800 crashed in the early hours on Saturday in the southern Russian city of Rostov-on-Don, killing all 62 people on board. The investigation into the Boeing crash is expected to take two months.