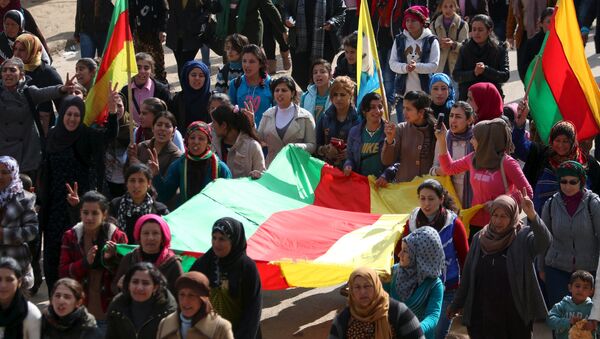 WASHINGTON (Sputnik) — On Thursday, Syrian Kurds announced they had established a federal region in northern Syria after their representatives organized a vote on the measure in the town on Rmeilan, and said they plan to finalize the move and present their declaration to the United Nations.

"If Americans want to remain true to their expressed values, they should and would endorse the Kurdish experiment in federal Syria," Xulam stated on Friday.

The US government stated it was opposed to Kurdish self-rule and any autonomous regions in Syria, while the Syrian government warned that the Kurds’ decision had no legal standing.

The bid for an autonomous federal region comes amid the UN-sponsored intra-Syrian talks in Geneva aimed at achieving a political transition in Syria from which the Syrian Kurds have been excluded.

Xulam noted that if the Kurds are not included in the talks, they are unlikely to accept any of its results.

"Not everything is decided at Washington, DC. The same should apply to Damascus," Xulam said. "People want to be part of the government; they don’t want the government telling them what to do all the time."

Xulam observed that because Kurds make up about 10 percent of the population of Syria, they also deserve a voice.

"Now that the [Syrian] government has been degraded, the Kurds feel it is time to go for their political rights. Federalism is going to be an experiment so to speak. I think it is the right step forward given the balance of forces in the region," he maintained.

On Friday, a representative of the of the Kurdistan National Congress confirmed that Kurdish groups will not recognize the outcome of the ongoing intra-Syrian talks, expected to last until March 24, if they do not reflect the ethnic group’s interests.