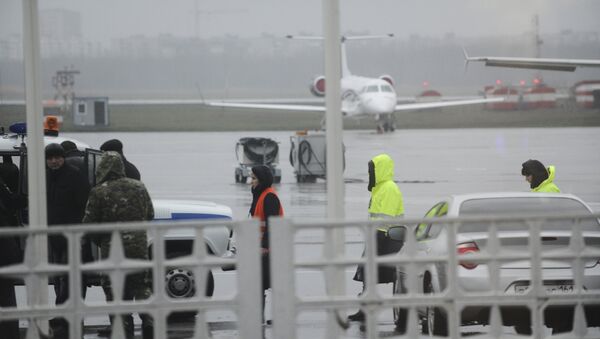 © REUTERS / Sergei Pivovarov
Subscribe
International
India
Africa
Russian Transport Minister Maxim Sokolov said Saturday he did not have information about possible technical faults aboard FlyDubai’s passenger jet prior to its crash in Rostov-on-Don.

Russia
Main Phase of Search Operation at FlyDubai Plane Crash Site in Russia Over
MOSCOW (Sputnik) — Earlier in the day, FlyDubai Boeing 737-800 plane coming from Dubai crashed while attempting a landing amid poor weather conditions at the Rostov-on-Don Airport (ROV), leaving no survivors from those 62 people aboard.

"I do not have such information," the minister said during a televised interview with Russia 1 channel’s Vesti Nedeli.

Visibility and wind flow velocity at the Rostov-on-Don airport at the time of the FlyDubai plane crash were acceptable for the airfield to be open for inbound flights, the Russian transport minister said.

"Pilots of different aircraft made different decisions, but on the whole I’d like to stress that visibility and wind speed figures showed that the airport could take in incoming flights," Maxim Sokolov said in a televised interview with Russia 1 channel’s Vesti Nedeli.

He added that the airport was working as usual, and planes were taking off and landing as normal.