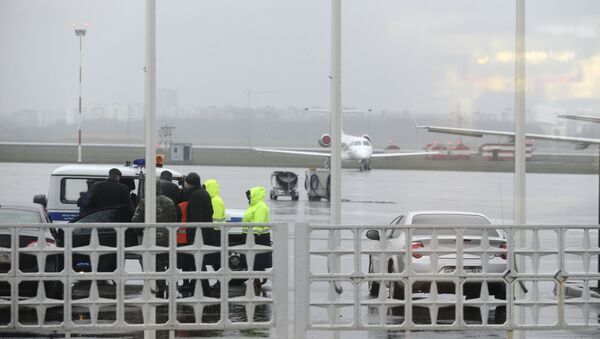 © REUTERS / Sergei Pivovarov
Subscribe
International
India
Africa
A Spanish co-pilot of the FlyDubai FZ981 flight, which crashed on Saturday in Russia on its way from Dubai, had enough experience, Ariel Shocron, the technical director of the Spanish Union of Airline Pilots (SEPLA), told Sputnik.

MADRID (Sputnik) — On Saturday, the FlyDubai Boeing 737-800 plane coming from Dubai crashed while attempting landing amid poor weather conditions at the Rostov-on-Don Airport (ROV). All people on board, including 55 passengers and seven crew members, died in the crash.

"The co-pilot was employed previously at the Canary Islands-based Naysa company. He had experience… The FlyDubai is an low cost airline but we know that all crew members are quite experienced," Shocron said.

FlyDubai CEO Ghaith al-Ghaith earlier said that the captain of the crashed aircraft had flown 5,965 hours and the co-pilot had had 5,769 hours of flying experience.

According to Shocron, it is enough experience as an average co-pilot in the Spanish Iberia airline has about 10,000 hours of flying time.