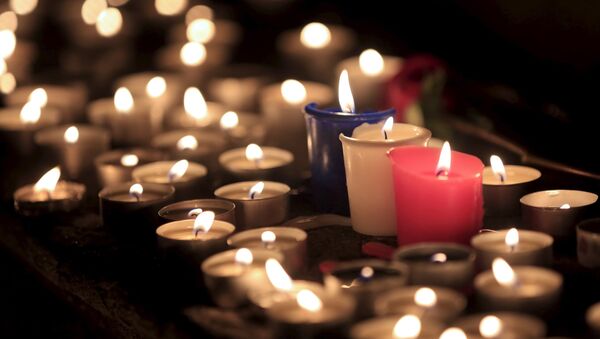 © REUTERS / Aly Song
Subscribe
International
India
Africa
Participants of the global ecological campaign in Russia's big cities will commemorate passengers of the FlyDubai plane killed in the crash on Saturday.

Russia
Crashed FlyDubai Boeing Sent No SOS Messages
According to representative of the Russian Ministry of Natural Resources and the Environment Nikolai Gudkov, the international environmental campaign Earth Hour will start in Moscow and St. Petersburg with a minute of silence.

The FlyDubai Boeing 737-800 plane coming from Dubai crashed at about 03:50 Moscow time (00:50 GMT) on Saturday while attempting to land amid poor weather conditions at the Rostov-on-Don Airport (ROV).

All 62 people on board — 55 passengers and seven crew members — are confirmed dead.

"The whole entertainment part of the event has been canceled, the campaign will start with a minute of silence commemorating those killed in Rostov-on-Don," Gudkov said.

A spokesman for the World Wildlife Fund (WWF) in Russia, Lyudmila Lyagushkina, noted that the event is set to take place in many cities across Russia and called on organizers to cancel the entertainment activities in all regions.

Earth Hour is a global initiative urging all people worldwide to turn off the lights and electrical appliances for one hour as a sign of respect to our planet and its future. In 2016, Earth Hour is set to take place on Saturday, March 19 from 20:30 to 21:30 (Moscow time).

Earth Hour is the biggest ecological campaign on the planet. It usually attracts over 2 billion people worldwide and takes place in more than 170 countries and 7,000 cities.