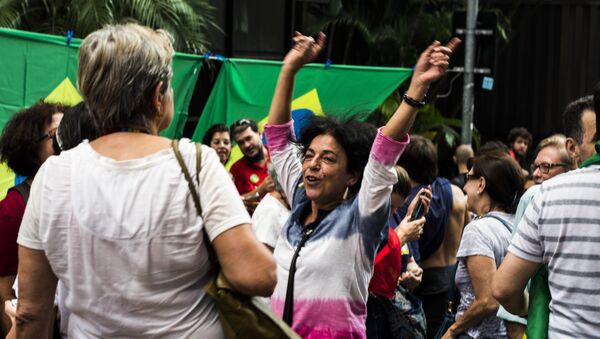 © Photo : Leonardo Veras
Subscribe
International
India
Africa
In response to anti-government protests that rocked Brazil, close to 100,000 people took to the streets of Sao Paulo Friday in support of the governing Workers’ Party.

The pro-government supporters gathered to protest against what they saw as an attempted coup against President Dilma Rouseff's government.

Despite being involved in a corruption scandal, pro-government protesters believe that Rouseff and her predecessor Luiz Inacio Lula da Silva, known as Lula, have helped to lift many Brazilians out of poverty over the past decade.

At the same time, a series of anti-government protests have rocked Brazil since last week after President Rouseff named Lula as chief of staff.

The country's highest court blocked the nomination of the former president to a cabinet post on Friday, marking the latest twist in a political crisis.

Tens of thousands of anti-government protesters took to the streets of Sao Paulo and blocked parts of the city center on Friday to rally against Rouseff. Riot police used water cannons and tear gas to disperse demonstrations.

Last week, approximately three million people across Brazil protested against the government, accusing the president of corruption and causing the economic downturn in the country.