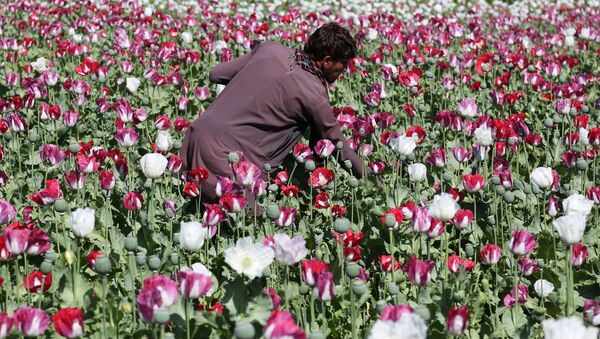 During recent Congressional hearings in Washington Pentagon officials faced tough questions about progress made in America’s so-called war on drugs in Afghanistan. It appeared that opium production there had spiked since the Taliban left, after billions of dollars spent on counter-narcotics, Reason magazine wrote.

"The war on drugs in Afghanistan, to the extent there is a war on drugs, has been a failure," Republican Congressman Thomas Massie concluded after pressing witnesses from the Department of Defense on what kind of metrics they use to gauge success in their counternarcotic efforts in Afghanistan.

According to General John Sopko, the special inspector general for Afghanistan reconstruction, the United States has spent $113 billion in Afghanistan since 2002, to train and arm Afghan National Security Forces seen by many US military experts as highly inefficient and to promote good governance.

Sopko said that despite 8.4 billion of those dollars spent on counternarcotics efforts specifically, Afghan farmers were producing more opium "now than they did during the Taliban years."

"It has been a successful export for the last 15 years that we have been there," Sopko said.

Washington, Kabul Losing War on Drugs in Afghanistan - US State Department
Opium production in Afghanistan has tripled since the Taliban was ousted by the 2001 US-led invasion.

According to UN figures, Afghanistan now accounts for 90 percent of the global heroin production.

Despite billions spent to eradicate opium crops in Afghanistan, the crop is more popular than ever there, leading many to wonder whether some US forces may actually be encouraging its growth and the heroin it later becomes.

In July 2015 the US Centers for Disease Control warned that heroin use had more than doubled among young adults ages 18–25 in the past decade.

GMO Opium? Super Seeds Produce More, Use Less Water for Afghan Poppy Crop
It was also reported that opium production in Afghanistan was stronger than ever before.

This rise would have been impossible prior to the US-led invasion, and it comes despite some $8.4 billion spent to wipe out opium production in Afghanistan.

In fact, it appears that, under the watchful eye of the US, opium use has expanded to new parts of Afghanistan and growers now make use of modern, advanced agricultural technologies.

According to US media reports, numerous photos featuring American soldiers patrolling opium fields in Afghanistan indicate that America may really be involved in the opium trade.

As Abby Martin noted in a 2014 investigation for Media Roots, while the Taliban had all but eradicated opium, it began to thrive just months after American forces ousted the Taliban regime in 2001.

Poppy Fields Forever: Will Daesh Hijack Opium Business in Afghanistan?
Martin said that the CIA has long been tied to the global drug trade, putting more effort into controlling rather than eradicating illicit substances.

Another reason for the thriving opium production in Afghanistan is that it is the only means of subsistence for  the country’s impoverished peasants.

Among the groups profiting off the Afghan opium trade — and the failed efforts to eradicate it — is the mercenary group Academi, better known by its former name, Blackwater. Last year RT reported that Academi earned $569 million from counternarcotics contracts in Afghanistan.

After 15 years and perhaps a million dead the only mission that has been accomplished in Afghanistan is the increase of  heroin production.

Poppy fields provide both cash to networks of power-brokers and insurance to farmers at the bottom of Afghanistan's feeble economy.

Portable and long-lasting, the high value per kilo of opium makes it attractive to families who fear they may need to flee, or see fields of conventional crops destroyed by fighting.