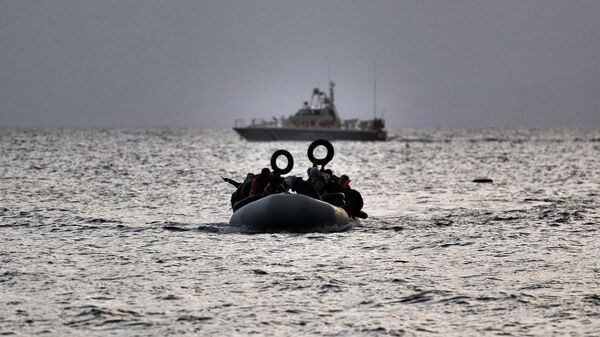 A Turkish coastguard ship was allegedly seen trying to capsize a boat with about 40 refugees on board this morning, according to witnesses from a humanitarian rescue boat, the Times of Malta reported Friday.

Several photos appeared on Twitter showing an alleged Turkish coastguard ship chasing a dinghy packed with refugees. According to the Maltese source, the incident happened near the Greek island of Agathonisi around 8 AM local time.

​The attackers were trying to hit the refugee boat seeking to disable its engine first using a paddle but then using a rope hook, according to witnesses. Seeing that their attempts were in vain, a bigger Turkish coastguard ship began to circle the refugee boat trying to capsize it.

The migrants attempt to protect themselves and engine with a red rag pic.twitter.com/qUAEpPfNIz

​"While this was taking place, a larger coastguard vessel started circling the migrants' boat creating a dangerous wave intended to flood the engine, but could have also capsized the vessel," the Malta-based Migrant Report said.

Turkish coastguards then attempt to swamp/capsize the dinghy with full-throttle broadside wake. pic.twitter.com/MoPA5QlUDU

​The chase is said to have continued for about 40 minutes before the dinghy was only half a mile away from Agathonisi's shore.

Turkey to Accept Irregular Migrants, EU to Accept Same Number of Refugees
Earlier in the day, EU leaders reached an agreement on the EU-Turkey action plan that envisions a one-for-one exchange of undocumented migrants for approved refugees.

Europe is currently tackling a major migrant crisis as thousands of people are traveling across the Mediterranean Sea from conflict-torn countries in North Africa, the Middle East, and Central and South Asia, to find safe haven in European countries.