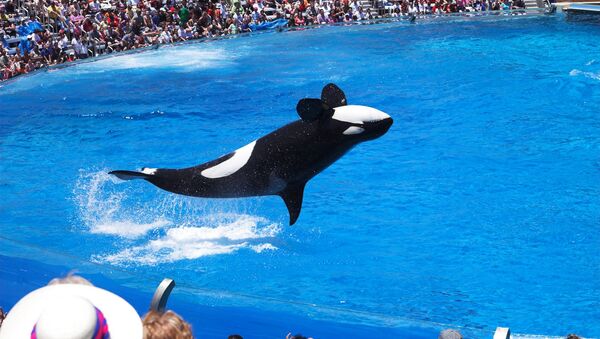 © Flickr / woolennium
Subscribe
In a significant win for animal lovers and activists worldwide, the controversial theme park SeaWorld has announced that they will end their orca breeding program.

The announcement was made on Thursday by SeaWorld CEO Joel Manby, who stated that it was a direct response to intense protest and negotiations with the Humane Society. Manby also announced that SeaWorld would partner with the animal advocacy group.

The admission that widespread protests were effective is a sharp change from last month, when SeaWorld confessed that they had sent employees undercover to infiltrate activist groups.

"The Society's attitude toward these very, very large, majestic animals under human care has shifted for a variety of reasons, whether it's a film, legislation, people's comments on the Internet," said Manby.

"I really think the orca over-hang and the questions about it — whether people are right or wrong about it — it wasn't worth fighting that. We needed to move where society was moving."

The park will now immediately stop breeding orcas, and additionally claims they will also soon end the practice of making them perform. In addition, SeaWorld agreed to invest $50 million over the course of the next five years for the rescue and rehabilitation of marine animals and Humane Society advocacy campaigns.

"These changes are something that advocates have been urging for years, and I think SeaWorld will find that visitors will reward their actions with a renewed interest in the parks," Representative Schiff said in a statement on Thursday.

SeaWorld Admits it Planted Moles in Animal Rights Group
SeaWorld has been under intense scrutiny ever since the release of the documentary Blackfish, which focused on Tilikum, a killer whale, and the dangerous and heartbreaking consequences of keeping large cetaceans in the small confines of captivity.

The 35-year-old orca was captured near Iceland and taken from his mother when he was two years old, and has lived in cramped SeaWorld tanks ever since. In the wild, orcas are highly social animals who live in stable social or family groups, traveling widely. It is not uncommon for animals to stay with their mothers for their entire lives.

Over the years, Tilikum has killed three people, something which experts have attributed to aggression resulting from depression caused by being confined.

Earlier this month, SeaWorld announced that Tilikum is dying, from a bacterial infection that is not responding to treatment.

Following the film’s release, the park’s attendance dropped significantly and has continued to steadily decline. In February, the parks reported a loss of $11 million for their fourth-quarter.

"The sunsetting of orcas in captivity is a game changer for our movement, one that’s been a long time coming, and one that is only possible because of your advocacy and participation," the president and CEO of the Humane Society, Wayne Purcell, said in a statement following Thursday’s announcement.

The director of Blackfish, Gabriella Cowperthwaite, also celebrated the decision, and noted that SeaWorld’s breeding program sells the animals to international parks, a key aspect of their business model.

"But mostly I applaud the public for recalibrating how they feel ethically about orcas in captivity," Cowperthwaite said. "I didn't imagine necessarily that the documentary would spark so much change. I just sort of went about telling the story."

When Manby was asked whether he would also be ending shows involving dolphins and other captive marine animals, he stated, "Stay tuned on that."

"A lot of people don't understand how hard it is internally to make these kinds of decisions," he said. "We need to execute this well. We need to make sure we have the organization in the same direction. Then we will apply those learnings elsewhere."