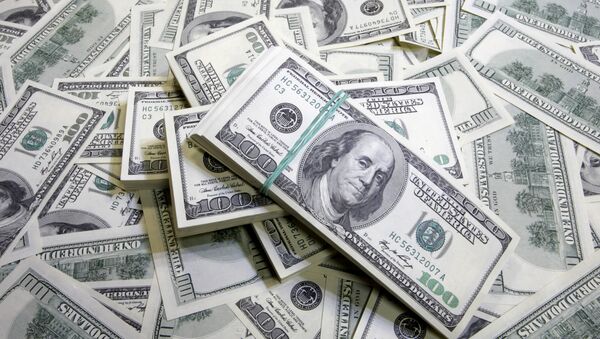 Russia has increased its holdings of US securities by $4.8 billion in 2016, according to the US Treasury Department.

At the annual rate, the sum increased by $14.7 billion.

"It is obvious that the Russian government has adopted this conservative investing policy and has invested in US treasuries," he explained.

Despite the fact that last year Russia’s holdings of US Treasury securities decreased amid the tensions between Moscow and Washington, Russia never abandoned the policy of investing in the US debt.

Since December 2014, Russia gradually decreased its holdings. In April 2015, they reached $66.5 billion. Since May 2015, Russia’s holdings have again been increasing.

Buying US debt, Russia is securing its stable foreign exchange earnings and at the same time is deepening the debt of the world’s strongest economy. "Thus, Russia is not only saving its gold and foreign currency reserves but also increasing them," Kochetkov said.

Russia is the 15th largest holder of US Treasury securities, with $96.9 billion. China leads the list with nearly $1.3 trillion. Japan ranks second, with $1.1 trillion.

000000
Popular comments
me no understand... 'Invest in U.S. Debt' ?? me small mind, no understand big things
armor
17 March 2016, 16:30 GMT1
000000
This move doesn't surprise me one bit. Russia hasn't survived through the ages because they are a stupid people, by no means, and I believe it's moves l this that "confuse" westerners about how a Russian thinks: complex and strategic! Keep on keepin' on, Russia!